Roger Corman's 1963 film is getting a new restored Blu-ray release at the end of the month.

In an early announcement to retailers, The Film Detective will release 'The Terror' on Blu-ray on May 31.

Famous for being one of Jack Nicholson’s earliest film roles, The Terror was shot on sets remaining from the shoot of the iconic horror film The Haunted Palace. Although officially credited to Corman, The Terror had a total of five collaborative directors, including Nicholson himself and Francis Ford Coppola.

Commented film historian Phil Hopkins, owner of The Film Detective, “After years of sub-par versions, The Film Detective brings The Terror to the screen as it’s never been seen before, fully restored from 35mm archival material in its original aspect ratio. I think fans will be thrilled with the unparalleled quality of this Blu-ray release, not only visually but by the impact of the soundtrack.”

In 18th century France, Lt. Andre Duvalier (three-time Academy Award-winner Jack Nicholson, The Departed, As Good As It Gets, A Few Good Men, The Shining), an officer in Napoleon’s army, has been separated from his regiment. Wandering near the coast, he spies a young woman (Sandra Knight, Frankenstein’s Daughter, Blood Bath) and calls out to her. When she fails to acknowledge, he follows her into the dark surf and strangely loses consciousness.

He awakens in a house tended by an old woman, Katrina (Dorothy Neumann, Sorry, Wrong Number, The Ten Commandments), who claims not to know the mysterious lady. On his way once again, Andre comes upon the castle of Baron Victor Frederick Von Leppe (Boris Karloff, Frankenstein, The Mummy, How the Grinch Stole Christmas).

There he learns that the girl is in fact the spirit of the Baron’s late wife, being used as a pawn by the witchy Katrina who is bent on driving the elderly Baron to suicide.

Also starring Dick Miller (A Bucket of Blood) as Stefan, married in real-life to Knight (who portrays the ghost of Ilsa, the Baroness Von Leppe), who was visibly pregnant with their daughter during filming.

The Terror is presented in full screen with an aspect ratio of 1.85:1 and original sound.

You can find the latest specs for 'The Terror' linked from our Blu-ray Release Schedule, where it's indexed under May 31. 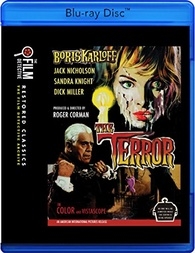