The film noir is heading to Blu-ray in January.

In an early announcement to retailers, The Film Detective is preparing 'Kansas City Confidential' for Blu-ray on January 25.

In Kansas City Confidential, four robbers hold up an armored truck, getting away with over a million dollars in cash. Joe Rolfe (John Payne), a down-on-his-luck delivery driver who is accused of involvement in the heist, sets out to discover who set him up and to exact revenge. He follows a trail that leads him to a web of hired killers and corrupt police in Mexico. Kansas City Confidential was the source of inspiration for Quentin Tarantino’s Reservoir Dogs. An imaginative film noir classic, this is a fast-paced and highly entertaining gem!

You can find the latest specs for 'Kansas City Confidential' linked from our Blu-ray Release Schedule, where it's indexed under January 25. 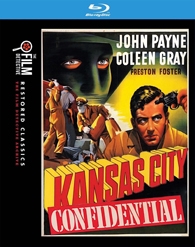