Blacklisted Film 'Salt of the Earth' Bound for Blu-ray

The drama previously blacklisted in the 1950s will make its Blu-ray debut in July. Pre-orders are now live.

In an early announcement to retailers, The Film Detective is preparing 'Salt of the Earth' for Blu-ray on July 14.

'Salt of the Earth' centers on a long, difficult workers' strike against a mining company in New Mexico. Ramon Quintero (Juan Chacon) fights for equity of wages as well as health and safety issues, but at home he mistreats his wife, Esperanza. When the men are forced to end their picketing, Esperanza joins the other women who demand to play a role in the strike, against their husband's wishes. Written, directed, and produced by members of the original blacklisted "Hollywood Ten," 'Salt of the Earth' is a powerful, persuasive drama that educates and inspires.

You can find the latest specs for 'Salt of the Earth' linked from our Blu-ray Release Schedule, where it's indexed under July 14. 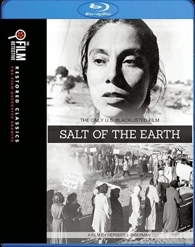 Discs mentioned in this article: (Click for specs and reviews)
Salt of the Earth (Blu-ray)