Hit the court with the 2015 NBA Championship on Blu-ray in July. You can pre-order the disc here.

In an early announcement to retailers, Team Marketing is preparing '2015 NBA Championship: Highlights' for Blu-ray on July 28.

NBA Champion fans, be the first to own the only officially licensed DVD and Blu-ray of your team's triumphant season. You haven't seen anything until you have seen the official 2014-2015 NBA Champions DVD and Blu-ray Combo. Loaded with clutch bonus features including profiles on your favorite players and in-depth analysis. Experience what it is to be a champion!

Specs and specific supplements have not been detailed yet.

You can find the latest specs for '2015 NBA Championship: Highlights' linked from our Blu-ray Release Schedule, where it's indexed under July 28. 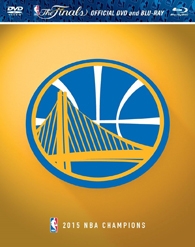