Alejandro Amenábar's acclaimed 1996 thriller is planned for Blu-ray in December. You can order it here.

In an early announcement to retailers, Tanelorn Films will be releasing 'Tesis' on Blu-ray on December 9.

The winner of 6 Goya Awards - including Best Picture - Tesis is an American-style thriller from Spain's director sensation Alejandro Amenabar (The Others, Open Your Eyes). Angela (Ana Torrent: Spirit of the Beehive, Cria), is a university student writing her thesis about violence in the media.

During her research, she comes across a shocking ''snuff'' film (a film where a murder is actually committed for the camera) that has apparently been shot on the campus. Investigating further, she uncovers clues that the university's administrators may be involved in an unexplained series of student disappearances, leading her to the ultimate terrifying revelation: she might be the next victim. Tesis has been acclaimed by critics around the world as a superbly constructed thriller that generates considerable suspense and thrills from beginning to end.

You can find the latest specs for 'Tesis' linked from our Blu-ray Release Schedule, where it is indexed under December 9. 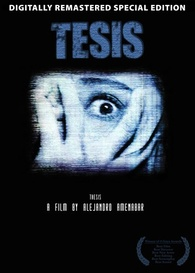