Richard Mogg's slasher throwback has arrived on Blu-ray and is limited to only 100 units.

Sub Rosa Studios Cinema is selling 'Massage Parlor of Death' on Blu-ray which was made available for purchase on January 18.

Ruby, an unlicensed massage therapist, has a nasty habit of killing her clients in the most horrific ways. Using the blood of her victims, Ruby attempts to resurrect the deranged spirit of her long-dead lover. But will her newly-hired hooker "employee" throw a wrench (or more) into the mix? You'll have to find out in "MASSAGE PARLOR OF DEATH"... where there are NO HAPPY ENDINGS!

The Blu-ray is limited to only 100 units and includes both the Full HD and Downmixed VCR Cuts of the movie. The price for the Blu-ray is $25.

You can find the latest specs for 'Massage Parlor of Death' linked from our Blu-ray Release Schedule, where it is indexed under January 18. 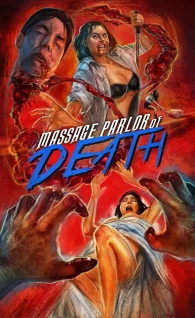