Up in the sky! It's a bird! It's a plane! It's the 42-Disc Complete Series of Smallville!

After the final five seasons languished as solo releases for years, Smallville is finally getting a complete series release on October 19th, 2021. This massive 10-season 42-disc set with Digital copy brings Tom Welling's entire journey as Clark Kent to Blu-ray. SRP for this sucker will be priced at $179.99 - but once this goes up for pre-order I'd expect those Amazon and online retailer sale prices to drop significantly. For this price though you're getting over 9,000 minutes of content with an additional 28 Hours of archival bonus materials that were originally part of the DVD sets. 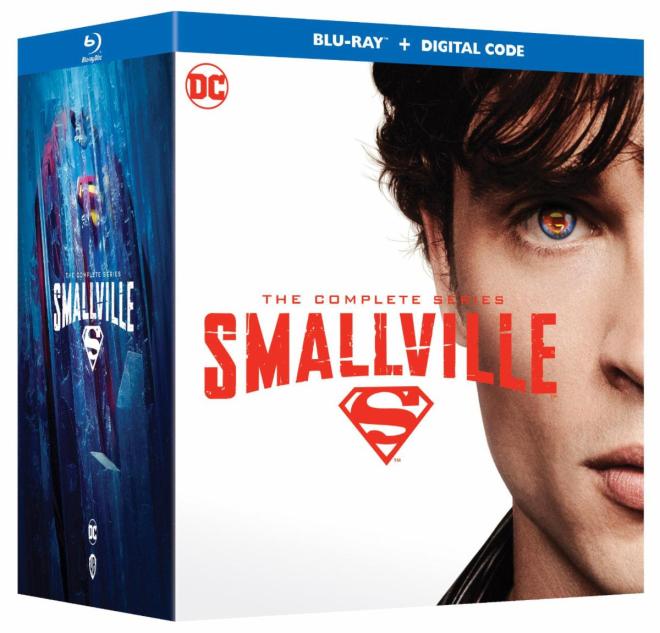 As of right now, single-season releases of Seasons One through Five haven't been announced. I know quite a few folks who bought the Seasons Six through Eight on Blu-ray expecting the first few to follow but it's been ten years since the final season hit Blu-ray and that didn't happen. We've even had pre-built listings in our archive for the day those would be announced but that never happened. Understandably, buying a complete series package instead of just the seasons you need may be a bit of a sting. If this is going to be the only way to get the entire series in 1080p on disc, it's nice to get everything in a tight convenient package. Hopefully, the packaging is decent and not like the flimsy Mission: Impossible set.

As of this writing, this isn't up for pre-order yet, but as soon as it is we'll update the listing and let everyone know.

Check out the full press release

OR THE FIRST TIME EVER ON BLU-RAYTM
SMALLVILLE: THE COMPLETE SERIES
20th ANNIVERSARY EDITION
Featuring All 218 Episodes from the Iconic Series
Flying into Homes on Blu-ray October 19, 2021
BURBANK, CA (July 27, 2021) – It’s been 20 years since Clark Kent first arrived in Kansas, and in honor of the 20th Anniversary of the remarkable series, Smallville: The Complete Series 20th Anniversary Edition will soar onto Blu-ray for the first time ever from Warner Bros. Home Entertainment on October 19, 2021. This set for the ultimate fan features all 218 episodes along with over 28 hours of bonus features from all 10 incredible seasons, plus Digital Copy (US Only). Smallville: The Complete Series 20th Anniversary Edition Blu-ray is priced to own at $179.99 SRP ($209.99 in Canada) and will also be available on DVD for $154.99 SRP ($184.99 in Canada).
The groundbreaking, Emmy®-winning 10-season hit that redefined the origins of the world’s greatest super hero is all here – from Krypton refugee Kal-El’s arrival on Earth through his tumultuous teen years to Clark Kent’s final steps toward embracing his destiny as the Man of Steel. Relive a decade’s worth of thrills in fantastic adventures full of action, heart and humor in abundance, all anchored by the marvelous performance of Tom Welling at its center. Savor again the series’ thoughtful and imaginative integration and reinvention of the iconic characters of DC lore. And let your spirits be lifted up, up and away.
Starring Tom Welling as “Clark Kent,” Allison Mack as “Chloe Sullivan,” Kristin Kreuk as “Lana Lang,” Michael Rosenbaum as “Lex Luthor,” John Glover as “Lionel Luthor,” Erica Durance as “Lois Lane,” Annette O’Toole as “Martha Kent,” John Schneider as “Jonathan Kent,” Justin Hartley as “Oliver Queen,” Sam Jones III as “Pete Ross,” Cassidy Freeman as “Tess Mercer,” Aaron Ashmore as “Jimmy Olsen,” Eric Johnson as “Whitney Fordman,” Laura Vandervoort as “Kara,” Callum Blue as “Zod,” Jensen Ackles as “Jason Teague” and Sam Witwer as “Davis Bloome,” Smallville has also featured many notable guest stars including Terence Stamp, James Marsters, Michael McKean, Ian Somerhalder, Jane Seymour, Brian Austin Green, Pam Grier, Helen Slater, Michael Ironside, Julian Sands, Tori Spelling, Rutger Hauer and Christopher Reeve.
Superman was created by Jerry Siegel and Joe Shuster. Based on DC Comics characters, Smallville was developed for television by Alfred Gough & Miles Millar. Its executive producers have included Michael Tollin, Brian Robbins, Joe Davola, Alfred Gough and Miles Millar, James Marshall, Brian Peterson, Kelly Souders, Todd Slavkin, Darren Swimmer, Greg Beeman, Ken Horton and Tom Welling. The series is from Tollin/Robbins Productions, Millar/Gough Ink and Warner Bros. Television.
Smallville: The Complete Series 20th Anniversary Edition includes 2 DVD discs with over 28 hours of bonus features originally released on the Smallville Seasons 1-10 DVD sets.
MORE THAN 28 HOURS OF BONUS FEATURES
DIGITAL
Smallville: The Complete Series is currently available to own on Digital. Digital purchase allows consumers to instantly stream and download to watch anywhere and anytime on their favorite devices. Digital movies and TV shows are available from various digital retailers including Prime Video, Apple TV, Google Play, Vudu and others.
SMALLVILLE: THE COMPLETE SERIES 20th ANNIVERSARY EDITION
Street Date: October 19, 2021
Order Due Date: September 07, 2021
Blu-ray Presented in 16x9 widescreen format
Running time: Approx. 154 Hours
Blu-ray Price: $179.99 SRP ($209.99 in Canada)
42-Discs (40 BD-50s + 2 DVD-9s for the Bonus Features)