Want to watch multiple sports games and view your Fantasy Football stats on the same screen at the same time? Want to play games, stream them, and view stats all at once on one TV? Well then, Skreens just might have the perfect solution for you. The Skreens Nexus lets customers connect and view multiple HDMI devices on one display at the same time.

Customers simply connect their HDMI components (Blu-ray players, game consoles, Roku, PC, etc.) to the Skreens Nexus, and then connect the box to their display. From there, the product can combine all of the connected sources in real time in 1080p/60 with no lag -- allowing users to view all of their content at the same time. In addition, the Skreens Nexus comes with a built-in web browser that can also be viewed in conjunction with the HDMI sources. The Skreens mobile app then gives customers complete control over the layout of their sources, allowing users to change the size and arrangement of different content. 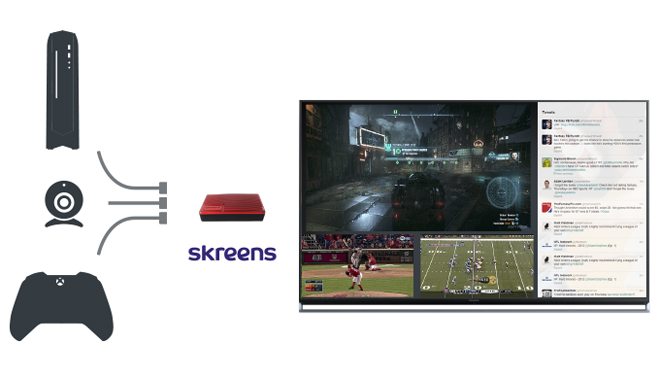 Skreens is offering the Nexus in four models: The Nexus Two ($199) and Nexus Two Pro ($299) with two HDMI inputs, and the Nexus Four ($370) and Nexus Four Pro ($450) with four HDMI inputs. The Pro models add extra features designed with streamers in mind, including more control over how content is displayed. Likewise, multiple units can be chained together to add support for even more HDMI sources.

The Skreens Nexus products will not be available in retail until late 2016, but the company is taking Kickstarter orders now with a March 2016 ship date planned. The Kickstarter campaign will end on November 1.