The Nunsploitation horror flick is coming to Blu-ray in April.

In an early announcement to retailers, Severin Films is preparing Dark Waters for Blu-ray on April 11.

It has been acclaimed as "visually amazing" (Videoscope), "deeply disturbing" (BBC Radio One), "a must see for serious horror buffs" (Film Review), and compared to the works of Bergman, Bava and Argento. Now experience the modern Nunsploitation masterpiece from co-writer/director Mariano Baino as you've never seen or heard it before: When a young Englishwoman attempts to discover her mysterious connection to a remote island convent, she will unlock an unholy communion of torment, blasphemy and graphic demonic depravity. Louise Salter (INTERVIEW WITH THE VAMPIRE) stars in this "stunning and horrifying debut" (Digitally Obsessed) filmed on location along the grim Ukraine coast now transferred in HD from the original 35mm negative and featuring over 4 hours of startling Special Features.

Full specs have not been announced yet, but supplements will include:

You can find the latest specs for Dark Waters linked from our Blu-ray Release Schedule, where it's indexed under April 11. 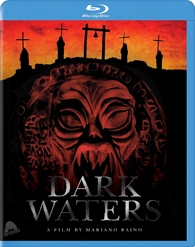 Discs mentioned in this article: (Click for specs and reviews)
Dark Waters (Blu-ray)