Mélanie Laurent's thriller is now available on both formats.

In Galveston, Roy (Ben Foster) is a heavy-drinking criminal enforcer and mob hit man whose boss set him up in a double-cross scheme. After killing his would-be assassins before they could kill him, Roy discovers Rocky (Elle Fanning), a young woman being held captive, and reluctantly takes her with him on his escape. Determined to find safety and sanctuary in Galveston, Roy must find a way to stop his boss from pursuing them while trying to outrun the demons from his and Rocky's pasts.

The release includes a making-of featurette.

You can find the latest specs for Galveston linked from our 4K and Blu-ray Release Schedules, where it is indexed under December 11. 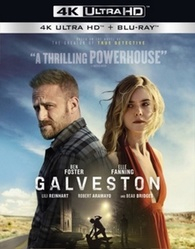 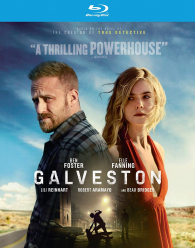