The action-thriller starring Pierce Brosnan is headed for Blu-ray in November.

In an early announcement to retailers, RLJ Entertainment is working on 'I.T.' for Blu-ray on November 22.

In I.T., Mike Regan (Pierce Brosnan) is a successful, self-made man who has it all: a gorgeous wife, a beautiful teenage daughter and a sleek, state-of-the-art "smart home." But he soon finds himself in a deadly, high-stakes game of cat-and-mouse when his I.T. consultant, Ed (James Frecheville), starts using his skills to stalk Mike's daughter and endanger his family, his business, and his life. In a world where there is no privacy, and personal secrets can go viral by the click of a mouse, Mike needs to rely on his old connections to defeat a new kind of nemesis.

You can find the latest specs for 'I.T.' linked from our Blu-ray Release Schedule, where it is indexed under November 22. 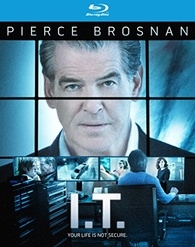