In an early announcement to retailers, RLJ Entertainment will be releasing 'A Christmas Horror Story' on Blu-ray on November 24.

It's the season of joy, peace, and goodwill…unless you live in Bailey Downs. Last Christmas Eve, two teens came to a grisly end in a school basement. Now, one year later, a new set of horrors has come to town. As three friends explore the site of the massacre, a malevolent spirit is determined to keep them there forever. One of the first cops to the scene of the bloody murders has new complications as his seven-year-old son exhibits terrifying and violent behavior. And when a local family seeks reconciliation with an estranged aunt for the wrong reasons, they suddenly find themselves running in terror from Krampus, the demonic anti-Santa Claus. Not even St. Nick is immune to the terror as he fights back against a horde of zombie elves. This is destined to be a holiday no one will ever forget.

You can find the latest specs for 'A Christmas Horror Story' linked from our Blu-ray Release Schedule, where it's indexed under November 24. 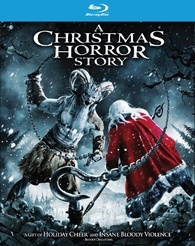