With an emphasis on audio quality, the new wireless speakers aim to blend convenience with premium performance.

Held at the Gansevoort Hotel in NYC, the demonstration covered a variety of audio clips, streaming sources, and features, offering an enticing peek at what both models can do. Likewise, the company's founder, Rikki Farr, and President/Chief Engineer, Donald North, were both on hand to guide the demo and answer any questions.

Founded by Rikki Farr -- known for his storied work as a live concert producer for a dizzying array of legendary artists, including The Beatles, Pink Floyd, Bob Dylan, and The Who -- Riva Audio was born from a desire to create a premium yet still affordable alternative to lesser "tin-can" wireless speakers. In essence, the company aims to use its extensive industry experience and passion for the medium to recreate the "truth of the music" and the rich feel of a live performance while maintaining the convenience and space-saving aspects of all the best wireless Lifestyle technologies.

According to Farr, if Sonos is the "Prius" of the wireless audio industry, then Riva is positioning itself as the "Tesla" brand. To help set the course for this goal, Riva first hit the scene with the Turbo X in 2014 and the Riva S in 2015, establishing its place in the market with two high quality Bluetooth speakers.

And now the company is officially launching the next phase of its product lineup: The Riva WAND Series.

Expanding playback support beyond Bluetooth to include Wi-Fi, Chromecast Built-in, AirPlay, Spotify Connect, DLNA, and integration with the Google Home app, the new Arena and Festival models let users stream music from an extensive collection of sources and apps, along with multi-room audio capabilities.

Here's a rundown of key features and specs per Riva:

■ Designed with an open architecture to connect via Wi-Fi, Bluetooth®, AirPlay™, DDMS; DLNA and more.

■ Connect up to 32 speakers across multiple zones.

■ WAND is Chromecast built-in ready to use with the Google Home app for quick and easy set up.

■ Easily control your speakers with apps you already know and love from your smartphone, tablet, laptop or desktop computer.

■ Optional battery pack gives you up to 20+ hours of listening time, no power required. (Arena Model)

■ Water resistance allows you to take it to the lake, pool, beach and more. (Arena Model)

■ Away mode allows you to create your own network of one or more WAND speaker[s] when there is no Wi-Fi network available so you can take the party anywhere.

Serving as the lineup's compact model, the Arena is suitable for both in-home use and portable, outdoor playback thanks to an optional 20+ hour battery pack. The speaker features fullrange custom ADX drivers with 3 passive radiators to create up to 101dB. And while that all might sound pretty good on paper, just how good does it actually sound?

Well, for demo purposes, Riva first streamed an instrumental jazz track through Spotify. With rich, deep resonance behind each bass line, the track filled the room with impressive presence and clarity, allowing each instrument to shine without the low-end drowning out or the high-end shrieking. To demonstrate more of the speaker's precision, a track with distinct dropping, rolling, and clicking effects was played. Once again, the Arena handled the audio with appropriate detail. 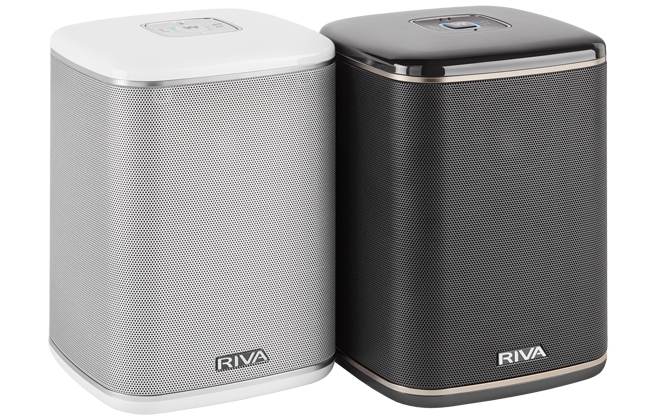 Additional music styles were played as well, and even with compressed material from Spotify, the speaker's sonic profile presented a pleasing sense of balance and range, belying its small size. Likewise, walking around the medium-sized hotel room and listening to the music in different spots revealed a surprisingly consistent sound. Sure, certain areas did sound a tad better than others, but in general the compact speaker provided a robust listening experience throughout the entire space.

And if a single Arena just isn't enough for your needs, multiple units can also be linked together. To demo this feature, an additional Arena was placed on the opposite end of the room and both devices played back the same streaming track. The dual speakers complemented each other very well with no discernable sync issues. And though the demo kept both speakers in individual stereo modes, two units can also be paired together for separate left and right playback to create an even wider soundstage. 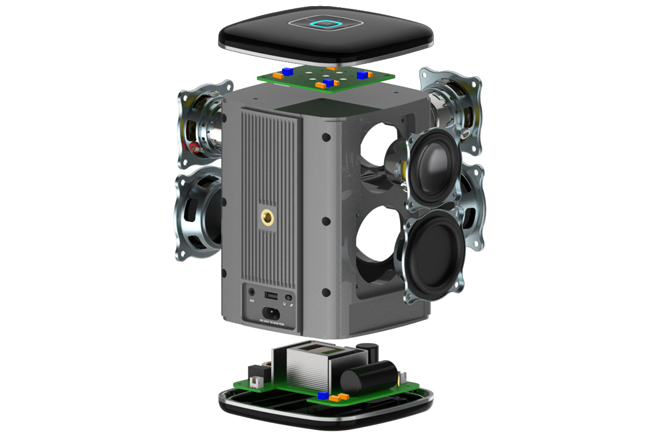 The Riva Arena is now available for an MSRP of $249 in black with a titanium grill or white with a silver grill. In addition, the optional battery pack is available in black or white for $99.

Stepping things up a notch, Riva also brought out its beautiful Festival table-top speaker. Designed for in home-use, the unit features an interior MDF cabinet to reduce vibrations and colorations, and 6 custom ADX woofers and tweeters coupled with 4 passive radiators to offer up to 106dB of output without dynamic range compression and bass as low as 38Hz.

With the speaker handsomely placed atop a stand and the volume upped to the max, the demo started with a track from Thomas Newman's score for American Beauty. As an orchestra of instruments filled the room, each element of the audio came through with strong bass, clean highs, and surprisingly wide stereo separation, highlighting small nuances, gentler notes, and more aggressive cues with appropriate emphasis.

Moving on, we next played a jazz piece titled "Chicken Feathers" and it's here where I first started to really hear Riva's efforts to recreate the feel of a live performance pay off. The plucking bass line had a natural resonance and there were times when the Festival's sonics really did start to evoke the acoustic quality of an actual club stage.

This continued with a rendition of Crazy by jazz pianist/vocalist Diana Krall. The delicate, lush vocals carried a warm sense of dimension while also hinting at the type of reverb one would hear during a live performance with no sign of brittleness, making it almost feel like I was right there in the room with the artist. There was maybe a tiny inkling of harshness as the low-end met the vocals, but by and large the range and balance here blew away other typical wireless speakers of this size, calling to mind much larger and much more expensive tower speaker systems.

Giving a more modern track a try, we also sampled a song by The Shins, and the band's melodic indie rock style came through with spacious separation, once again demonstrating very solid stereo imaging -- especially considering the single cabinet nature and small width of the speaker. In addition, I also got to sample a high resolution audio track featuring a cello and piano piece. Instrumentals were distinct with a pleasingly full range capable of both quiet and loud moments without any of the flatness one finds in lower quality speakers, though I did detect what sounded like some very minor and fleeting distortion in the highs. 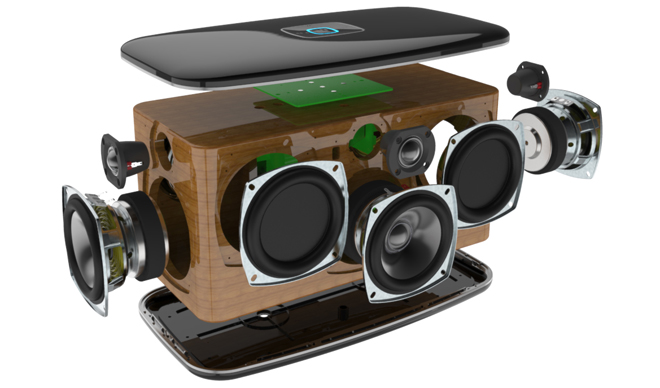 Next, we switched gears a bit to demo the WAND Series' robust app and casting support, allowing me to get a bit more hands on by using my own Android smartphone as the streaming source for the speaker. After a quick and painless connection process to the Festival through the Google Home app, I first attempted to play some MP3 tracks from the local storage on my phone through the Google Play Music app. And though the app was able to recognize the speaker, we unfortunately ran into a strange hiccup which resulted in an error screen every time I tried to cast a song. It's unclear exactly what the cause was, but it appears there might be a specific limitation tied to the Play Music app that requires casted music to be in the cloud and not on local storage.

Thankfully, after that momentary setback, I booted up the AllConnect app on my phone instead, and this time there were no issues to speak of. I was able to easily connect to the Festival over Wi-Fi and then play an MP3 of Radiohead's "Life in a Glasshouse" from my smartphone storage. Like the previous demo material, the track sounded great. And while users should be able to cast streaming and locally stored audio directly through many popular apps like AllConnect, Riva is set to release its own dedicated mobile app for playback as well.

The Riva Festival is now available in black with a titanium grill or white with a silver grill for $499.

As with any demo I experience, more time with the product is needed to form any kind of full opinion -- but my taste of Riva's new WAND Series has definitely left me wanting more. There were instances during the demonstration when the speakers really did start to mimic the tonal quality of a live concert, creating a level of performance that is quite special for a wireless multi-room speaker in this price-range.

And beyond the WAND Series, Riva also has some exciting additional products in the pipeline, including its first foray into the home theater space. Wireless 5.1 capabilities and a genuine TheaterBar are in the works, bringing Riva's emphasis on audio quality, affordability, and convenience to the world of surround sound.

For now, though, the Riva WAND Series is set to bring an impressive combination of quality and value to the growing multi-room audio market -- and if the demo I heard is any indication, the Festival and Arena should have no problem standing out from the pack.