Venture with me, friends, to Batuu, a remote outpost on the galaxy edge. Home to smugglers and rogues and adventurers, it's a smart place to hide out from First Order. And starting next year, it's a place where you'll have a chance to fly the Millenium Falcon, board a Star Destroyer during a battle, drink blue milk in a Cantina, and mingle with your favorite Star Wars characters.

That's right, for the first time in the history of the 40-year franchise, fans are going to literally be able to step into the Star Wars Universe in a new theme park land called Star Wars: Galaxy's Edge.

Currently under construction, Disney Parks says Galaxy's Edge will open "Summer 2019" at the Disneyland Resort in California and "late Fall 2019" at Walt Disney World in Flordia. There's also going to be a Star Wars Hotel in Flordia, but no opening "season" has been set. 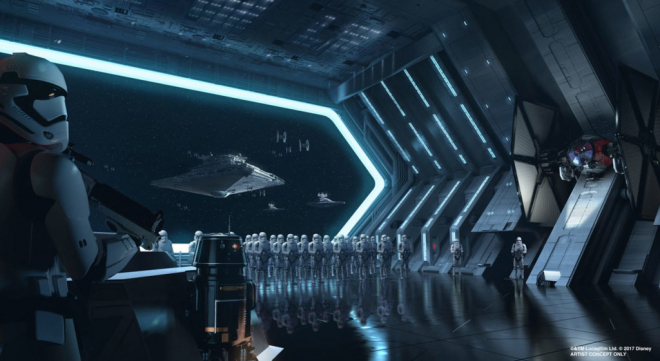 As alluded to above, there will be at least two rides and a restaurant. The Star Destroyer-set ride has been described by Disney Imagineers as the most epic attraction ever created. It will send riders on a Resistance Transport ship into a battle, around life-sized AT-AT walkers, and into a Star Destroyer. The second ride is a Millenium Falcon flight simulator. It should be a bit like Star Tours, but much more interactive with your ability to flip switches and press buttons. As for the Cantina, the only confirmed food or beverage item is the blue milk. 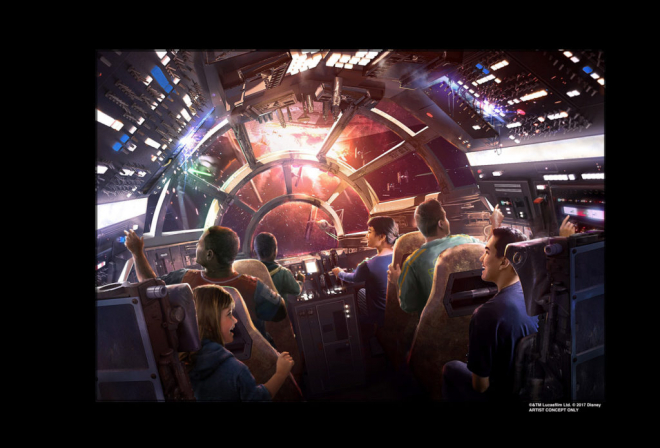 I'm personally less familiar with the Florida iteration (so we have no prediction about that), but if you're ever in Anaheim, the best way to sneak a peek at Galaxy's Edge is to ride Big Thunder Mountain Railroad, which has been offering riders glimpses of the construction for over a year.

If you'd like to learn more about Batuu, the droid L3-37 references the planet while talking to Lando Calrissian in Solo: A Star Wars Story and, apparently, the Thrawn Alliances novel, written by Timothy Zahn, makes a few references as well.

The Reasoning Behind Our Prediction

Outside "Summer 2019", Disney hasn't officially announced a specific opening date for Galaxy's Edge in California, but we think there might be a big clue tucked into Disneyland's Annual Passport Blockout Date Calendars.

The Deluxe Annual Passport is a mid-tier passport, giving folks park-hopper access to both the Disneyland Park or Disney's California Adventure most Sundays through Fridays during busier months. Generally, Deluxe blockout dates include March-to-September Saturdays along with big holiday weekends and the last two weeks of the year (Christmas & New Year's).

Disneyland and California Adventure blockout dates have traditionally been synced; check one calendar to see if you can enter both parks. Last month, Disney separated the Disneyland Park and California Adventure blockout date calendars. Meaning, if you're an annual passport holder, you now need to check two calendars to see if you can enter a given park on a given day.

Many speculated Disney's blockout date park-splitting was being put in place in advance of the large crowds expected for Star Wars: Galaxy's Edge. The idea, we think, is to get most tiers of Annual Passport holders used to checking two calendars and the idea that park entry can and will vary. But since the new split-calendars appeared, we haven't seen any variances between the two park schedules...

Annual Passport Blockout Date Calendars typically preview up to one year in advance. As I write this, you can currently see July 2018 through June 2019. And it's in June of next year where I think we can pinpoint the exact launch date of Disneyland's iteration of Star Wars: Galaxy's Edge.

Checking out the Deluxe Annual Passport Calendar, June 2019 looks different from any other June in recent history. Not only are there no Saturday blockout dates at Disney's California Adventure, but, after June 2, 2019, Deluxe Annual Passport holders won't be able to enter Disneyland Park on any Friday, Saturday, or Sunday.

Star Wars: Galaxy's Edge opens on Friday, June 7, 2019, or, if that Friday becomes an invite-only media day, Saturday, June 8, 2019 will serve as the grand opening.

What do you think, readers? Have we cracked the code? Let us know your theories in the comments and tell us what you hope to see most in Galaxy's Edge, or what you hope the Disney Imagineers capture about Star Wars in this new park. Cheers!