'The Dovekeepers' Mini-Series Deailed for Blu-ray

The two-part CBS mini-series is coming to Blu-ray in July.

In an early announcement to retailers, Paramount is preparing 'The Dovekeepers' for Blu-ray on July 14.

The Dovekeepers is based on the true events at Masada in 70 C.E. After being forced out of their home in Jerusalem by the Romans, 900 Jews were ensconced in a fortress at Masada, a mountain in the Judean desert. Besieged at Masada, the Jews held out for months against the vast Roman armies. The series recounts the events from the perspective of a few extraordinary women who arrive at Masada with unique backstories, but a common bond for survival. Additionally, these women, who work together daily as dovekeepers, are all concealing substantial secrets.

The Blu-ray will feature 1080p video, a DTS-HD MA 5.1 soundtrack, and supplements will include: Taking Flight: The Dovekeepers and Launch Promos.

You can find the latest specs for 'The Dovekeepers' linked from our Blu-ray Release Schedule, where it's indexed under July 14. 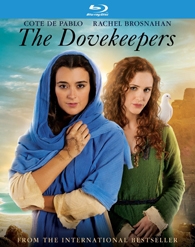 Discs mentioned in this article: (Click for specs and reviews)
The Dovekeepers (Blu-ray)