The acclaimed independent film featuring the voice of cult fave Jeffrey Combs will grow on Blu-ray in February.

In an early announcement to retailers, Parade Deck Films is set to release 'Motivational Growth' on Blu-ray on February 17.

Ian Folivor, a depressed and reclusive 30-something, finds himself taking advice from a growth in his bathroom after a failed suicide attempt. The Mold, a smooth talking fungus who was born of the filth collecting in a corner of Ian's neglected bathroom, works to win Ian's trust by helping him clean himself up and remodel his lifestyle.

With The Mold's help, Ian attracts the attention of a neighbor he's been ogling through his peephole, Leah, and he manages to find a slice of happiness despite his unnatural circumstances. But Ian starts to receive strange messages from his old and broken down TV set that make him realize that The Mold may not be as helpful as it seems to be, and strange characters combined with stranger events cast Ian's life in the shadow of an epic battle between good and evil that Ian is only partially aware of.

You can find the latest specs for 'Motivational Growth' linked from our Blu-ray Release Schedule, where it is indexed under February 17. 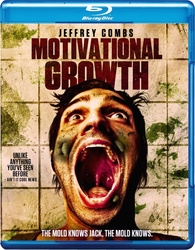