The drama from executive producer Terrence Malick will arrive on Blu-ray in January.

In an early announcement to retailers, Outsider Pictures is preparing 'The Vessel' for Blu-ray on January 24.

In this powerful faith-based drama from executive producer Terrence Malick (The Tree of Life), Martin Sheen (The West Wing, The Departed) stars as a local priest of a Latin American fishing village recovering from a tsunami that washed away dozens of elementary school students. Ten years later, one of the young villagers miraculously comes back to life, and the whole town wonders if he is a sign from God.

You can find the latest specs for 'The Vessel' linked from our Blu-ray Release Schedule, where it's indexed under January 24. 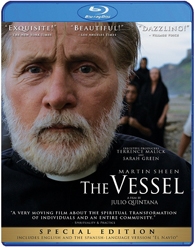 Discs mentioned in this article: (Click for specs and reviews)
The Vessel (Blu-ray)