The 1997 Italian horror film will be getting the Blu-ray treatment in January.

In an early announcement to retailers, One 7 Movies is working on 'Wax Mask' for Blu-ray on January 31.

There's a new attraction in town that's not for the fainthearted. A wax museum that recreates, for the thrills of a paying audience, some of the most gruesome murders ever committed by human hands.

A young man makes a bet with his friends that he can spend an entire night in the museum but he is found dead the morning after. Who is the savage slayer? The police are unable to come up with a reason or a clue to identify the murderer. Weirdly enough, the museum starts featuring new murder scenes as the killing spree increases. Is the metal-clawed killer that haunted Paris years ago, prowling the streets of Rome, looking for fresh flesh and blood?

Specs have yet to be revealed, but supplements include Backstage Scenes and Special Effects Scenes.

You can find the latest specs for 'Wax Mask' linked from our Blu-ray Release Schedule, where it is indexed under January 31. 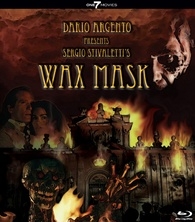