The thriller starring Abigail Breslin and Wes Bentley is now up for pre-order.

In an early announcement to retailers, Nasser is preparing 'Final Girl' for Blu-ray on October 6.

A psychological thriller about a beautiful teen girl new to town who is lured out to the woods by a group of senior boys to be the victim in their final initiation. Taught by her trainer, William, to be a lethal weapon, she turns the hunters into the hunted with a level of perversity far beyond anything they could have ever imagined.

You can find the latest specs for 'Final Girl' linked from our Blu-ray Release Schedule, where it's indexed under October 6. 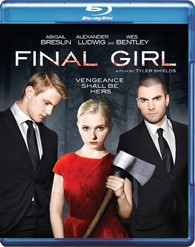 Discs mentioned in this article: (Click for specs and reviews)
Final Girl (Blu-ray)