In an early announcement to retailers, Mug Shot Productions is preparing 'New Orleans Music in Exile' for Blu-ray on November 22.

Directed by noted music documentarian Robert Mugge (Last of the Mississippi Jukes, Blues Divas), New Orleans Music In Exile is an intimate and eye-opening meditation on the resiliency of the artists and the magnitude of the loss. The film showcases musicians such as The Iguanas, Irma Thomas, Cyril Neville, Big Chief Monk Boudreaux, Stephen Assaf, ReBirth Brass Band and many more, and explores several well-known New Orleans music venues such as The Spotted Cat, Maple Leaf, Snug Harbor, and Palm Tavern.

You can find the latest specs for 'New Orleans Music in Exile' linked from our Blu-ray Release Schedule, where it's indexed under November 22. 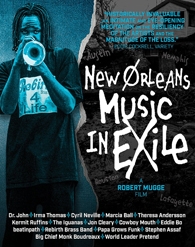 Discs mentioned in this article: (Click for specs and reviews)
New Orleans Music in Exile (Blu-ray)