The concert doc is sailing toward Blu-ray in July, and pre-orders are now live.

In an early announcement to retailers, Mug Shot Productions is preparing 'Deep Sea Blues' for Blu-ray on July 7.

Since the 1960s, generations of fans have adopted outdoor festivals as the ideal place to experience live musical performances. But in recent years, the best American music festivals have moved onboard specially chartered cruise ships sailing from the U.S. to the Caribbean, Mexico, and elsewhere. One of the first and most successful of these, Roger Naber's Legendary Rhythm & Blues Cruise, is now considered the true Woodstock of the Waves, offering, as it does, the finest in traditional and contemporary music along with the same sense of peace, love and community spirit most often associated with late '60s rock festivals.

At the same time, these Blues Cruises are a welcome contemporary refuge for artists who once performed in juke joints and Chitlin' Circuit clubs throughout the South, most of which have now disappeared. In January of 2007, Legendary's Blues Cruise to the Caribbean featured more than 70 performances (Taj Mahal, The Fabulous Thunderbirds, Otis Clay, Buckwheat Zydeco, Tommy Castro, Tab Benoit, Deanna Bogart, Lil' Ed & the Blues Imperials, Commander Cody Band) and 14 special guests (Bobby Rush, Ronnie Baker Brooks, Earl Thomas). It also featured daylong stops on the gorgeous islands of St. John, St. Barth's, and Grand Turk, two of which hosted additional concerts, and one a unique blues wedding on the beach. Director Robert Mugge captured that cruise for his film DEEP SEA BLUES, presented here on Blu-ray for the first time.

Specs have not been detailed yet, but supplements will include Bonus film: 'All James on Deck' shot on October 2010 Blues Cruise.

You can find the latest specs for 'Deep Sea Blues' linked from our Blu-ray Release Schedule, where it's indexed under July 7. 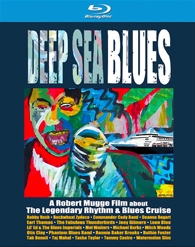