Travel to 'Jerusalem' on Blu-ray 3D

The 3D IMAX film will take viewers to the sacred city. Pre-orders are now live.

In an early announcement to retailers, MPI Home Video is preparing 'Jerusalem 3D' for Blu-ray on December 1.

Filmed for the first time in 3D for IMAX® and giant screen theaters, 'Jerusalem' is an awe-inspiring and intimate portrait (The Washington Post) of one of the world s most beloved cities. Discover why this tiny piece of land is sacred to Jews, Christians and Muslims through the experiences of three young Jerusalemite women as they celebrate the city s vibrant holiday traditions. Join world-renowned archaeologist, Dr. Jodi Magness, as she explores underground tunnels and ancient ruins to solve some of the city s greatest mysteries. Find out why, after thousands of years, Jerusalem and the Holy Land continue to stir the imagination of billions of people. Unprecedented access to the city s holiest sites, as well as rare and breathtaking aerial footage combine to make 'Jerusalem' a mesmerizing vision (The Boston Globe).

Specs have not been detailed yet, but supplements will include: Director Commentary; Archaeologist Commentary; Making Of; Aerial Trailer; Photo Gallery; Trailer; Tribute to Jake Eberts, RIP; Deleted Scenes; and Behind-the-Scenes.

You can find the latest specs for 'Jerusalem 3D' linked from our Blu-ray Release Schedule, where it's indexed under December 1. 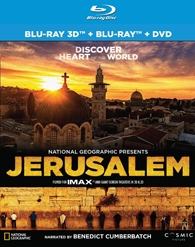 Discs mentioned in this article: (Click for specs and reviews)
Jerusalem 3D (Blu-ray)