A city is on fire. Smoke billows from block to block. Storefronts are reduced to cinder. Stray bullets bounce from rooftops. And former neighbors prepare for war. It sounds like a harrowing sequence ripped straight out of a post-apocalyptic thriller -- but for the citizens of Los Angeles on April 29, 1992, it was a scene all too real, capping off a decade of escalating racial turmoil with an all-out explosion of unfiltered rage.

And now, 25 years later, the city has been left with one lingering question…

Tackling the LA riots from every vantage point, John Ridley's documentary film, Let It Fall, addresses this quandary head-on, offering a comprehensive examination of the potential hows and whys behind the uprising. Through a mixture of talking head interviews and archive footage, the film highlights several key incidents which laid the groundwork for the conflict, before settling into a rather gripping account of the riot itself.

To this end, much of the early runtime focuses on mounting tensions between the police and black community of LA from 1982 to 1992, culminating with the infamous Rodney King beating and verdict, while also touching upon escalating animosity between neighboring African American and Asian American citizens. Throughout it all, the director chronicles the rise of PCP and crack cocaine use, gang violence, excessive police force, unjust shootings, failed policies, and growing suspicion and mistrust from all sides -- palpably painting the picture of a city gradually building toward disaster. 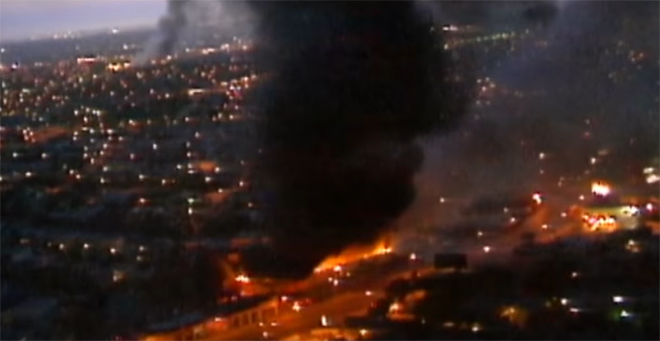 But despite the multitude of causes presented, definitive answers are not the filmmaker's true concern here. Instead, rather than single out blame or force a specific thesis, this becomes a documentary about perspectives, giving ample voice to all parties involved, presenting a mosaic of interview subjects, including LA residents, cops, criminals, lawyers, politicians, rioters, and victims.

Everyone gets a chance to describe their experience and everyone gets a chance to defend their point of view. And in a notable break from typical "talking head" documentary structure, Ridley actually refrains from explicitly designating who some of his interview subjects are until later in the runtime. This allows audiences to hear pieces of their stories and opinions free from the context of their specific place in the events -- initially stripping away any preconceived notions we might otherwise form while eventually shedding earlier comments in an entirely new light as participants are later identified.

And though the majority of the film's style is relatively standard for its genre, the director does use a few notable editing techniques here and there to further emphasize the conflicts on screen. For instance, one sequence makes great use of cross-cutting to piece together and contrast the account of a man's arrest, quickly transitioning back and forth between the suspect's wife and the officer who captured him as they tell the story. 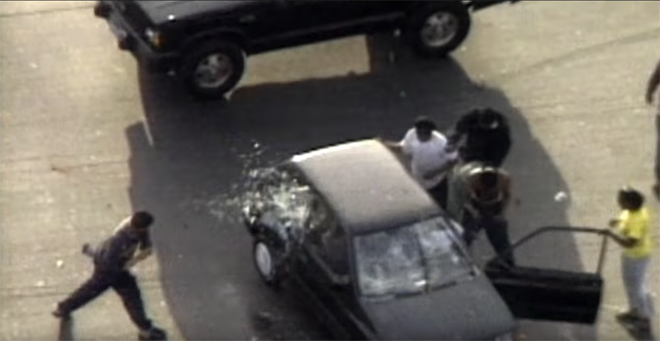 All the while, Ridley still manages to maintain an impressive level of objectivity through his filmmaking, leaving the subjectivity to his interview participants, shaping and connecting different viewpoints and conflicting conclusions into a surprisingly ambiguous yet singular vision. A vision made all the more powerful thanks to some truly startling footage from the riots themselves, revealing a city overcome with madness. Rudderless and fueled by a decade's worth of rage deprived of catharsis, the city simply implodes, turning on itself in a display of disturbing violence.

But more than just a depressing document of the many senseless acts we are capable of committing against each other, the movie also turns its focus toward rousing instances of compassion and bravery kindled within the chaos, spotlighting heroes of the community and the police force who risked their lives to save innocent victims caught in the crossfires of blind unrest. 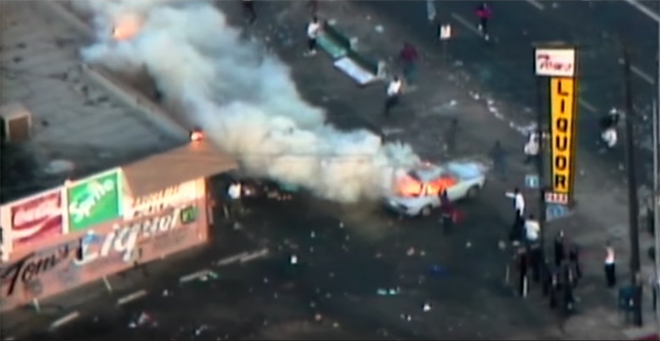 Evoking elements of true crime procedural and the escalating rhythms of a thriller, Let It Fall offers an absorbing and devastatingly impactful documentary experience -- one that remains gripping throughout its relatively long (145 min in its theatrical form) runtime. And through the film's unflinching look at the turmoil of the past, the narrative can't help but provoke thoughtful parallels to many hot-button racial issues of today. But whatever one's personal feelings on contemporary politics or social movements might be, there is no didactic or overbearing agenda here. In fact, Ridley's ultimate message is unifying, be it in hope or despair or in life or death.

In the end, we are always equal, whether we choose to acknowledge it or not.

Did the LA riots start with a single broken window? No, not really. Did they start with the Rodney King verdict? Well, that sure didn't help, but probably not.  As the film implies, after years of mounting pressure, the dam was likely to burst one way or another. Beyond the movie's specific focus on LA, Let It Fall ultimately becomes a larger examination of how civil unrest is born and festers. In essence, this is a film about how fires start -- about the horrors we are capable of inflicting upon each other and the inspiring bursts of compassion that can still endure among the flames.