Hi, Everyone, please welcome guest writer Josh LeBlanc, who has been helping us out on a couple of our other sites and decided to check out Movie Pass for HDD. Cheers!

-Can see a movie every day of the week.

-Have to be physical at the theater.

-Probably too confusing for your Mom (God love her)

Movie Pass -- the any movie, any theater, any day, service for $9.95 -- isn’t new. It’s actually been around for a few years. Before July of 2017 however, about forty thousands Movie Pass customers paid almost fifty dollars a month for the right to go to a standard non-imax or 3d movie, in the theater… every day.

But then they did something radical.

They changed their price to $9.95. Something that sent the country into a tizzy. Analysts said the price was unsustainable and that the company would go bankrupt.

When you buy a ticket with your Movie Pass card, which is actually a Mastercard, Movie Pass then pay the theater the full price for the movie ticket. They’re promising to do that EVERY DAY for subscribers. So, if you live somewhere like Los Angeles, where tickets can go as high as $18 dollars for a non-3d movie. Double what you pay for a month of subscribing to movie pass. Hence the pundits saying it’s unsustainable. Who’s going to pay for all these tickets? It’s not like Netflix where you pay a flat fee to have access to a select library. With Movie Pass you’re paying $9.95 to have access to ANYTHING that’s in the theater (save for 3D & IMAX).

Needless to say when they announced the price change, they were immediately bombarded by requests for the service, which pushed card delivery from a guaranteed five days up to 2-3 weeks, and some new subscribers weren't exactly thrilled.

1. Go to https://www.moviepass.com/ and enter credit card information and sign up.

2. Download the Movie Pass App for your iOS or Android device.

3. Wait to receive your Movie Pass Mastercard in the mail.

4. Physically go to the theater.

5. Once you’re within 100 yards of the theater, open the Movie Pass app on your smartphone, pick the movie and the time you want to see it at, and then click purchase.

6. The amount of that movie ticket is then loaded onto your Movie Pass Mastercard instantly.

7. Use the Movie Pass card to buy your ticket at either the automated kiosk or with a real live person.

DOES IT REALLY WORK?

The short answer… is an astounding YES! But there have been some frustrations.

I ordered Movie Pass from the Movie Pass Website on August 24th, 2017 and was immediately charged $9.95. I then downloaded the iPhone app and waited for my Movie Pass Mastercard to arrive.

The company issued a release that said they were having delays due to high demand. Which I totally understand, a lot of people online didn’t and there was a lot of angry tweets and reddit posts like this: “I still haven’t received my card yet! I’m just gonna cancel it, this is joke!”

Where did everyone’s patience go? Is it FOMO, are they afraid everyone is going to the movies without them? Are they mad they had to pay full price to see IT? I have not idea. Calm down people, they said it’s going to take a few weeks to catch up with the demand. That sounds reasonable to me.

Finally on September 22nd, 2017 it arrived. This is over four weeks. Again, it’s really not that big of a deal. I waited to order one, it’s my fault, really.

Keep in mind that, according to Movie Pass' website, even though they charge you right away for the service, your service doesn’t start until you activate your card. It’s October now and I still haven’t gotten changed a second month’s fee yet, so, so far they seem to be true to their word on that front. I don’t expect to be hit with another fee until sometime around October 25th.

I then fired up the App and looked for a list of theaters near me that accepted Movie Pass. The Laemle in North Hollywood was on the list. I was so eager to go try this card out that I got there and only thing playing within an hour, was The LEGO Ninjago Movie. Did that deter me from trying it out?

I picked Ninjago on my phone, selected the time and it asked me for the last four digits of my Movie Pass card. I entered the and waited for 30 seconds. It looked like it kind of froze on me, so, I backed out and then clicked don the time again and got the “SUCCESS” screen. It’s a little finicky, but, it appeared to work.

Next I went over to the box office, muttered “cough ninjago” under my breath, and handed over the Movie Pass card for the $12 dollar ticket… and it worked.

I’ve used it a few more times in the past week and it’s worked every single time.

It was actually a mistake to give me one of these things as I’m gonna swipe it until they take it away from me. 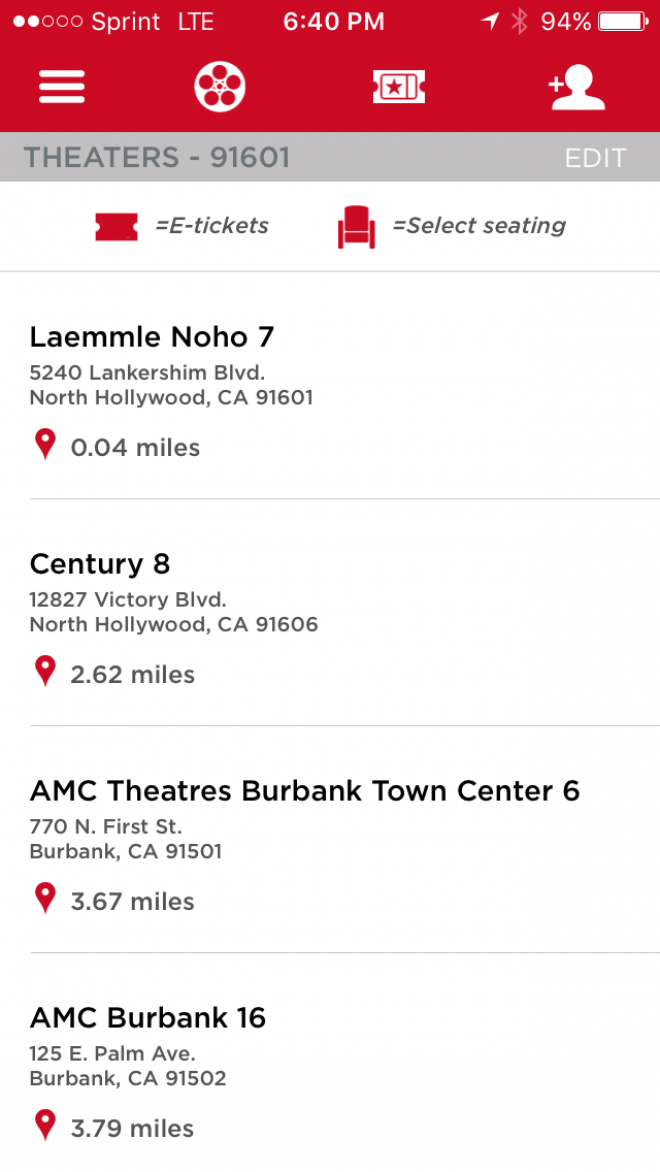 You have to be physically within 100 yards of the theater to buy the ticket. I know why they do it, they’d never make a profit if you could just select tickets from your phone and buy it. Why? For one people wouldn’t care if they didn’t go. They’d buy a ticket just to have one then if they had to cancel wouldn’t care because to them it would have been free. For two, it would get more use which would make it harder for the company to make a profit. I personally don’t mind the having to physically be at the theater, just know, you might have a hard time getting a ticket opening night in a big city to see a movie when you can't reserve a seat far in advance.

The card doesn’t work in Imax or 3D screens. Why? because they would definitely go bankrupt. There’s no financial model that makes sense when the tickets are that expensive.

Also, each time I’ve used it there seems to be a small hangup from when you select the purchase ticket time to the success screen coming up. I’m guessing what they’re really waiting on is the transfer of funds to your card. I bet you don’t get that “SUCCESS” message UNTIL funds have been deposited into your account. They probably don’t want to aggravate the ushers with people saying “Swipe it again, it’s in there.” forty times a night.

Regarding the stories of people who only received a portion of the ticket price on their card, and had to pay the difference and then send a picture of the stub to Movie Pass to get a refund, I haven’t had any of those issues.

You may have also read about AMC trying to block the use of Movie Pass. In fact, the only way they can do it is to block all Mastercards, which they’ve done in a few cities. This would be annoying to other people who don’t have Movie Pass and just want to use their regular old MasterCard. Having said that, it does currently work at AMC theaters in Los Angeles. Here’s another thing they won’t like. You can even get an AMC STUBS REWARD CARD and use it every time you go to the movies on Movie Pass and earn points towards free tickets and concessions. Churn those points guys, churn those points.

I’m not sure why AMC doesn’t want Movie Pass used at their theaters, though internet rumors range from they want to start their own version of the product, to fear that it reduces the value people think they’re getting with a movie ticket.

And, as someone who has to have a weekly phone call with their Grandfather to re-connect his HBO NOW subscription to his ROKU because he clicks “SIGN OUT” after every time he uses it, I can see using the Movie Pass App and card to be too much to process for anyone from a technology-challenged generation.

Lastly, before Movie Pass dropped their current monthly fee to $9.95 they sold a 50% stake in their company to Helios and Matheson Analytics Inc., a company that will then sell yourmovie-goingg history back to the studios. If that bothers you and I can see why it might bother some, then maybe Movie Pass isn’t for you. Personally, I see everything, so, it really doesn’t matter to me as my data is kind of useless to them.

Despite highlighting a few headaches and pitfalls, for me the pros of being able to see as many 2D movies as I possibly can for only $9.95/month outweigh the cons by leaps and bounds. Are there going to be some restrictions? Of course, it costs less than 4K Netflix, which makes me wonder if they'd change the service to include more pricing tiers. Say $30 a month to be able to see Imax or 3D movies and $50 a month to be able to buy tickets online for any date in the future. That’s where’d they’d really start to make money. People have a tendency to think they need something more than they actually do and are willing to overpay for the privilege.

For me, though, I love it and the service comes Highly Recommended for anyone who sees more than one non-IMAX or 3D movie per month in the cinema. If you’re on the fence about trying Movie Pass, what do have to lose besides $9.95. Try it!