The automotive SVOD/OTT platform now has a new app and even more motorsport content.

"With the new and improved Motor Trend OnDemand app, we are hoping to reach even more of our most loyal auto enthusiasts, with the top racing and motorsports programming and our own original content, such as the #1 web auto series Roadkill, available on almost any device, anytime, anywhere," says Scott Dickey, CEO of TEN: The Enthusiast Network. "Motor Trend OnDemand is the only video destination to 'bring the action' in the way that auto enthusiasts demand, 24/7/365, live and on demand, on the devices they own and use." 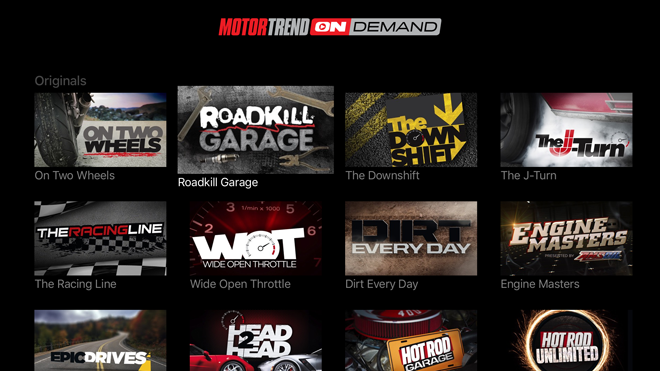 Here's a full rundown of new and improved features per the press release:

- Redesigned iOS and Android Apps: Fans can now stream the entire VOD catalog and live races on their smartphones and tablets with the completely redesigned apps for iOS and Android devices, as well as Apple TV.

- Formula 1 and IndyCar Archives: Over 20 years of FIA Formula 1 World Championship™ season review programming for the first time ever with the acquisition of Formula 1 archive rights. In addition, IndyCar programming, including repeat viewing of the full series of races 48 hours after live.

- Live Streaming on Mobile and Brand New Content: For the first time ever, all of the Motor Trend OnDemand platforms now support live streaming and live programming, allowing enthusiasts to watch races as they happen and on the go. It will also have updated original content, including exclusive bonus episodes and behind-the-scenes footage from its slate of original programs, and two new series, Roadkill Garage and Head2Head Drag Race.

Motor Trend OnDemand is now available through supported platforms for a promotional price of $4.99 per month/$49.99 annually. To coincide with the update, Motor Trend is also offering a special Motor Trend OnDemand Pick Me Sweepstakes. Fans can enter the sweepstakes by posting a photo of themselves enjoying their favorite gearhead activity with the hashtags #MTODPickMe #Sweepstakes on Twitter or Instagram. Winners will receive a seat for themselves and a guest to attend the 2016 Motor Trend Of the Year Awards in Los Angeles, California.