This week I had the great fortune to do something quite rare in the new-parenting universe. I went to the cinema. Twice! And, during this week's different-day double-feature, I realized a couple things. First, nothing replaces the full experience and scope of going to a movie theatre. More important, though, contrasting experiences underscored how vital it is to seek out a quality auditorium when stepping away from our home theatres.

My first screening was the contained sci-fi drama, 'Arrival', which is wonderful and heartbreaking and smart and everything in between. Screenwriter Eric Heisserer and director Dennis Villeneuve and the rest of the cast and crew made an incredibly moving and suspenseful film. I loved every frame.

But I also loathed every frame. 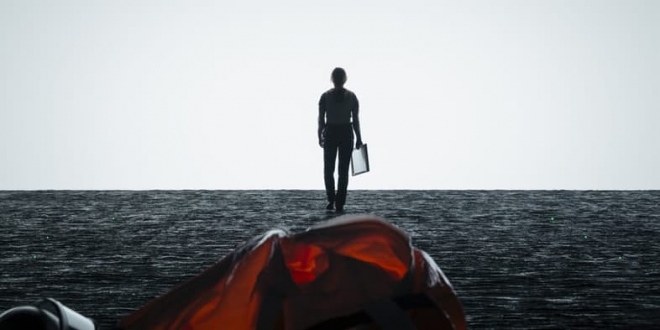 No, there weren't any focus issues or obvious projector problems. The sound was actually quite good. Cellphones stayed in pockets. And the auditorium itself was a modern and well-maintained Arclight location. But the contrast. Good lord, this purposefully shadowy movie was cast almost entirely in smudged GRAYNESS thanks to certifiably abysmal black levels. And with no black levels -- no contrast -- you lose colors and the overall image seems softer. It's a feedback loop for mediocrity.

I hadn't realized it until this moment, but swapping between my Panasonic Plasma and the VIZIO P-Series and the LG E6 OLED (review next week!) has spoiled my ability to watch content on displays with crap contrast. I almost walked out because it's a bit of an artistic tragedy to watch films this way.

Then came my saving grace.

Then came 'Moana', which is currently heading into its second weekend at a variety of multiplexes, including several Dolby Cinema at AMC premium auditoriums.

If you don't know what I mean by Dolby Cinema, have a read over HERE to catch up. The quick definition is this: Dolby Cinema, or Dolby Cinema at AMC, is a state-of-the-art cinema experience that combines Dolby Vision (a dual 4K laser projection system with a MILLION-TO-ONE contrast ratio) with Dolby Atmos (a fully hemispherical surround sound system that adds more subwoofers, full range and overhead speakers, and individual speaker amplification to standard commercial surround sound), leather recliners, and a massive screen.

Dolby Cinema (along with other competing laser projection systems) is one of THE BEST ways to watch movies. It's on par going out and buying yourself an OLED or Full Array Local Dimming equipped Ultra HD LCD, only the screen is probably taller and wider than your house.

'Moana' is Disney's latest Princess story. Like 'Frozen', it is modern with a fully realized (but flawed) female lead whose story is all her own. In other words, she's not waiting to be saved by a loving prince. Moana is the daughter of a Pacific Islander chief. She dreams of exploring the open ocean, but Dad won't let her leave the protective boundaries of their island's reef. Moana is also special; she has been chosen by the ocean itself to take on a special journey to find and escort the demi-god, Maui, across the sea so he can return the stolen heart of an island. If Moana fails, her island will die along with everyone she knows and loves. It's also a musical with a chicken sidekick and tons of details portraying the Pacific Islander voyager cultures. Much like 'Arrival', I loved every single frame and can't wait to share it with my little girl.

On top of a great story and characters and action, I was fortunate enough to catch 'Moana' at the AMC Del Amo 18, which is home to one of the newest Dolby Cinema at AMC auditoriums. The best way to describe this film's video and audio quality is to say, if it was an Ultra HD Blu-ray with Dolby Atmos sound, it would be one of the best looking and sounding discs in your collection.

'Moana' is pure demo material from start to end.

The Dolby Vision graded imagery was gobsmackingly gorgeous and rendered with a dazzling array of colors. Unlike Pixar productions, Disney Animation Studios productions offer less semi-photo-real surfaces, but that's not a problem at all. Moana's Island is drenched in tropical forest greens and turquoise waters and pink sea shells. Her side-kick chicken bursts with a mix of brown and purple. Moana's manta-ray spiritual guide shimmers in and out of the rolling waters with a neon glow. Maui's tattoos appear handmade in a deep shade of black. Volcano-monsters erupt with red and orange lava. And this one underwater realm of bioluminescent monsters features some of the most vivid colors ever put to film (to digital?). It's all incredible. Textures too are well rendered and bold, from creatures and clothing to the canoe sails to Moana's hair (both dry and wet). Dolby Cinema at AMC typically only plays is 2D, but the Dolby Vision version of 'Moana' is so clear it feels like you're watching glasses-free 3D.

(For what's it's worth, I checked with Dolby and did confirm 'Moana' is in the DCI P3 color space, but I thought maybe that sequence in the underwater land of the monsters was Rec 2020.)

'Moana's Dolby Atmos mix is shut-up-and-take-my-money good. If THIS track doesn't convince Disney's home entertainment division to include the Atmos mix on the Blu-ray, we may never hear a Disney film at home beyond 7.1. Compare this mix to what Marvel's doing with Atmos and it's a clear demonstration of how filmmakers can 1) utilize this technology in vastly different ways and 1) a lesson on how you can build entire aural universes with object-based audio. This mix rockets back and forth between intimate and grand, delivering everything from the subtle nuances of gently lapping waves and pecking chickens to the hemispherical immersion of epic Disney musical numbers to the all out assault of action sequences that are as thrilling as anything in 'Mad Max Fury Road'.

I just can't get over how Dolby Atmos, when done as right as it was here, tears away the sensation of sitting in a darkened room and propels audiences directly into the story. One moment I was a husband and father in his mid-30s, and the next I was a young princess listening to the songs of my ancestors, charging across the tropical seas with voices and orchestras and sound effects cascading all around me. I was also a fan of the mix's aggressive use of overhead sounds and deep rumbling bass. Like I said, demo material... made all the more pleasurable because the movie's also pretty great.

I write about Dolby products a lot. Sometimes because they invite me. Sometimes because I need a story. And sometimes, like today, because I'm simply in awe of what I've just experienced. As such, my goal here is to shout into this universe that QUALITY matters. Quality impacts the emotional experience of going to the cinema. And sure, quality won't save a bad movie, but it certainly adds to the magic of the good ones.

So do yourself a favor. Don't miss the chance to see 'Moana' in a Dolby Cinema before it's too late (click HERE for a list of locations). We may never get another opportunity to see and hear it as the filmmakers intended... on a sixty-plus-foot screen with laser-quality black levels surrounded by several dozen high-end speakers. Cheers.