'Diary of A Deadbeat: The Story of Jim VanBebber' Blu-ray Announced

The documentary on filmmaker Jim VanBebber will hit Blu-ray in April.

In an early announcement to retailers, Massacre Video is preparing 'Diary of A Deadbeat: The Story of Jim VanBebber' for Blu-ray on April 12.

Jim VanBebber, an uncompromising, underground, outlaw filmmaker from Greenville, Ohio has become one of the most infamous and controversial American independent filmmakers of our time. VanBebber brought us such cult classics as Deadbeat At Dawn (the first feature film made in Dayton, Ohio) My Sweet Satan, The Manson Family, and many others. Shot over the course of several years, Diary Of A Deadbeat is a documentary that follows VanBebber's life from his early super 8mm films to his days in Hollywood. Directed by young auteur Victor Bonacore, the documentary features interviews with an eclectic group of artists including Pantera's Phil Ansemlo, transgressive film director Richard Kern, Skinny Puppy's Nivek Ogre, R.A. The Rugged Man, Heidi Honeycutt, Stephen Biro, Damon Packard, Jessie Seitz, and many more.

Specs have not been detailed yet, but supplements will include: At Home With Mike Capone; Live In Boston!; Interview With Buddy Giovinazzo (director of COMBAT SHOCK) by Mitch Davis; Deleted Scenes; Locations Tour; VHS & Vanbebber With Chi Orengo; RA The Rugged Man Live Performance; Music Videos; Interview With Director; Interview With Producers; Plus Additional HIDDEN Surprises!

You can find the latest specs for 'Diary of A Deadbeat: The Story of Jim VanBebber' linked from our Blu-ray Release Schedule, where it's indexed under April 12. 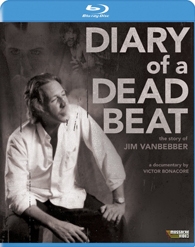 Discs mentioned in this article: (Click for specs and reviews)
Diary of a Deadbeat: The Story of Jim VanBebber (Blu-ray)