Mixing the convenience of digital downloading with the full quality of a disc format, Kaleidescape aims to deliver the best of both worlds.

Last week, High-Def Digest got a chance to speak with Cheena Srinivasan, CEO of Kaleidescape, and Luke O'Brien, Director of Content Operations, to discuss the company's growing product line, business philosophy, near brush with death, and upcoming developments.

With an assortment of premium media players and a growing library of HD and 4K Ultra HD digital titles being added to its own online store, Kaleidescape hopes to entice AV enthusiasts through the custom installation chain, positioning itself as an integral component of any complete home theater installation.

But just what exactly is Kaleidescape and what separates its service and products from the competition? Well, let's break it down...

Kaleidescape offers a series of premium digital media players, servers, and storage devices designed for use with its own Kaleidescape Movie Store. The company was initially founded back in 2001 and first started producing products with the launch of its DVD Media Server in the fall of 2003.

Speaking on the company's origins and goals, CEO Cheena Srinivasan says, "The vision for the company throughout our journey hasn't changed very much. It has been to present the finest cinematic experience in the comfort of your home."

To accomplish this, the Kaleidescape system eschews the typical streaming delivery methods of traditional digital platforms like Netflix, Amazon Prime Video, or VUDU. Instead, Kaleidescape actually downloads complete digital files to the local storage on a customer's Kaleidescape player or movie server. This allows the company to offer HD and 4K Ultra HD HDR titles at full disc quality with lossless audio (up to 24.5Mbit/s, including Dolby Atmos on select titles) and high bitrate video (up to 100Mbit/s).

Or, as Srinivasan puts it, "We deliver the entire enchilada."

Likewise, since the title is stored locally in full, content will always be played back at peak quality every time, offering a "predictable cinematic experience" without any of the buffering or variable bitrate tricks that other platforms use.

On traditional streaming methods, Srinivasan says, "You think you're watching a 4k title but... you may be watching pieces of the movie in 4K and portions of the movie in just 1080p or even less than that." He added, "The problem that Kaleidescape has set out to solve... is the intersection of the quality of a physical disc with the convenience of internet delivery."

And though the company does not offer its products direct to consumer, the Kaleidescape lineup is available through the custom installation and system integration chain. With that in mind, the players and titles include several features geared toward users with full blown home theater setups and integrated home automation systems.

"We tend to provide enormous amounts of metadata information that are useful bits of data for control systems. So when the movie begins we tell [the system] to dim down the lights automatically, adjust the screen masking precisely, or if you have screen risers we can do that," said Srinivasan.

Basically, "All you need to do is press play."

While Kaleidescape is now back and in good shape, the company recently went through a challenging setback that almost caused it to shut down for good. Speaking on the whole ordeal, Srinivasan called it an "interesting life lesson."

Essentially, Kaleidescape made the mistake of pre-announcing its flagship Strato Movie Player before it was ready to ship. The Franco-Italian company making the player's SoC (system on a chip) then decided to abandon its set-top box division entirely. This created a big problem for the product's launch, especially when it came to software support, leading to a situation where the demand was there, but Kaleidescape simply could not start fulfilling shipments.

Thankfully, in large part to support from some angel and individual investors -- many of whom were customers who didn't want to see the service go under -- the privately held company has been able to bounce back, restructuring and resizing its operations. Now, Kaleidescape has fulfilled its previous promises while delivering over operating plans for the first nine months of the year, enabling the platform to focus on its growing product line and content library.

Kaleidescape's current flagship lineup is comprised of its Encore collection, offering the highest quality playback and storage solutions, including models with support for 4K Ultra HD files in HDR10 with immersive audio formats like DTS:X and lossless Dolby Atmos. Sadly, current models are not hardware-ready for Dolby Vision HDR, but when discussing plans for their next-gen platform, Cheena Srinivasan said it would be "silly" not to support Dolby Vision -- though they had nothing specific to announce at this time.

Strato Movie Player ($4,495) - The company's most advanced media player, the Strato offers support for 4K Ultra HD at up to 60 frames per second, and lossless audio formats like Dolby TrueHD, Dolby Atmos, DTS-HD Master Audio, DTS:X, and PCM. Likewise, the device includes HDR10 playback. Models are available with 6TB of storage ($4,495) or 10TB of storage ($5,595) for up to 180 4K Ultra HD movies, 330 Blu-ray quality movies, or 1500 DVD quality movies. 100Base-TX/1000Base-T Ethernet (RJ45 connector), Integrated 802.11ac Wi-Fi, an HDMI 2.0a output, an HDMI 1.4 output for audio, digital toslink output, and coaxial RCA output are included as well. The unit can play movies from its own storage, or from a separate Terra movie server or another Strato movie player.

Strato C Movie Player ($3,495) - Serving as a more compact version of the flagship Strato player, the Strato C includes the same basic 4K Ultra HD playback features of its larger sibling but does not include any internal storage. Instead, the device can play movies from a separate Terra movie server, or from another Strato or Alto movie player.

Alto Movie Player - Though it lacks Ultra HD support, the Alto Movie Player offers support for full HD digital files with lossless Dolby Atmos and DTS:X audio. Likewise, the device includes an integrated Blu-ray drive for disc playback. An optional 6TB hard drive is also available for storing up to 200 Blu-ray quality movies, or 900 DVD quality movies. The player can be used on its own or to play files from a Terra movie server, another Alto or a Strato movie player, or from a Kaleidescape Disc Server.

Terra Movie Server ($12,995) - Available in 24TB or 40TB storage options, the Terra Movie Server can store up to 720 4K Ultra HD digital titles. The device can then send content to any Strato, Strato C, and Alto players in a customer's home network over its 100Base-TX/1000Base-T Ethernet RJ45 connector, with support for up to 10 simultaneous playbacks of 4K Ultra HD movies.

With a license agreement between 22 of the top 25 main movie distributors in the US, the Kaleidescape Movie Store offers a growing collection of full disc quality HD and Ultra HD HDR titles for download to Kaleidescape products. The store currently holds one of the largest collections of digital 4K movies with a total of around 270 Ultra HD titles set to be available by the end of the summer. Likewise, the service includes about 115 4K films with HDR10 support, and select titles also include lossless Dolby Atmos soundtracks. As noted in the product section, Dolby Vision is not currently supported, but that will likely change when future players are released. Finally, some movies also feature supplements.

4K HDR titles currently available for purchase include films like Kong: Skull Island, The Fate of the Furious, Unforgiven, Batman v Superman, Fantastic Beasts, Argo, Mad Max: Fury Road, Jason Bourne, and many more. Prices range from around $16 for some HD titles to as much as $37 for new 4K HDR titles -- and while that is more expensive than other digital services, the company believes that the increase in quality here earns that premium cost. And as a fantastic added bonus, the store also features UltraViolet support for select movies, allowing customers to leverage their registered digital copies onto the Kaleidescape store, including access to digital 4K HDR titles from codes included with Ultra HD Blu-ray disc purchases at no additional cost. Typical HD movie sizes with lossless audio come in at around 30GB, and typical Ultra HD HDR movie sizes with lossless audio come in at around 60GB. 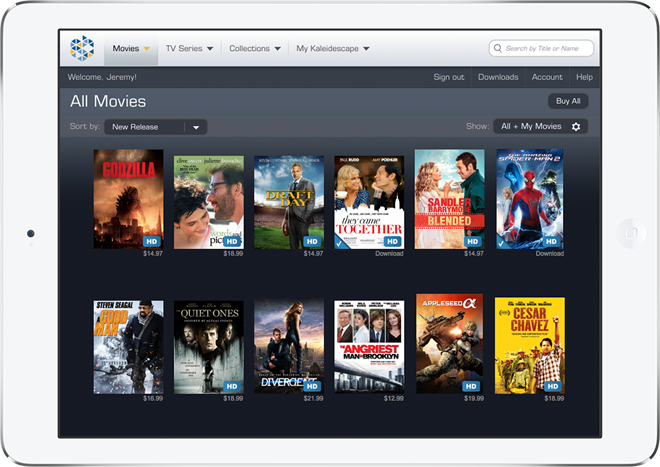 And beyond mainstream new releases from the likes of Disney, Sony, Fox, Warner Bros., Lionsgate, and Universal, the store also offers several HD indie and classic film options from studios like Kino, Orchard Films, Magnolia, and Cinedigm. Likewise, though not yet available in 4K or HDR, the service includes full seasons of several popular shows in HD like House of Cards, Mr. Robot, Better Call Saul, The Flash, and Breaking Bad. Finally, Kaleidescape recently started adding HD music concert titles from labels like Eagle Rock and has plans to add a few other studios as well.

As the future market viability of physical media remains unclear and the limitations of traditional streaming services continue to be readily apparent, Kaleidescape has really placed itself in a rather unique position, allowing the company to offer the best of disc and internet platforms without their key weaknesses. That is, if you can afford the price of admission.

As Cheena Srinivasan puts it, "Think of us as the fine dining equivalent of content delivery over the internet. It's not for everybody but we're here for those that care about it."

And though the cost might be a bit too steep for most casual viewers, the company's commitment to quality is admirable. In Kaleidescape's view, the weakest link in most users' entertainment experience is no longer their display, speakers, or receiver. Instead, it's often the source device stuck streaming lossy digital content. And the company is attempting to change that with one simple mantra...

"Fix you weakest link and increase your cinematic experience." 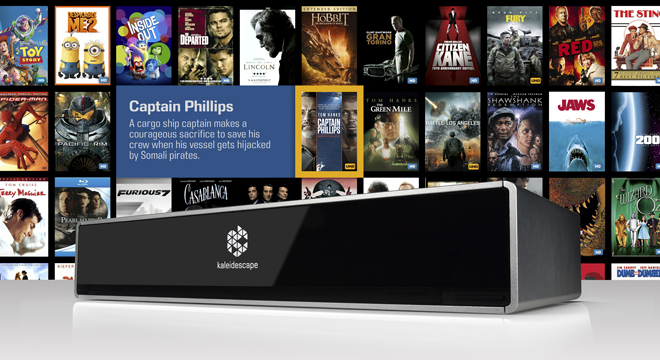