The 1987 film from the Swiss artists is planned for Blu-ray in April.

In an early announcement to retailers, Icarus Films is preparing to release 'The Way Things Go' on Blu-ray on April 14.

Called “the merry pranksters of contemporary art” (The New York Times), Fischli and Weiss collaborated for 33 years, drawing worldwide notoriety and praise for taking on big questions with humble materials and a tongue-in-cheek manner. THE WAY THINGS GO, now on Blu-ray for the first time, is their most acclaimed and beloved work.

You can find the latest specs for 'The Way Things Go' linked from our Blu-ray Release Schedule, where it's indexed under April 14. 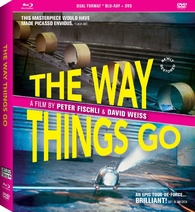