Meir Zarchi's I Spit On Your Grave (AKA Day of the Woman) is coming to 4K Ultra HD Blu-ray courtesy of Ronin Flix. Last November, we took a look at their incredible 2-Film Collector's Edition set. Top to bottom, this iconic revenge thriller had never looked or sounded better on home video. Not an easy movie to consume by any stretch, the folks over at Ronin Flix are giving this Exploitation genre classic a new 3-Disc Limited Edition set:

I Spit On Your Grave - 4K Ultra HD Blu-ray 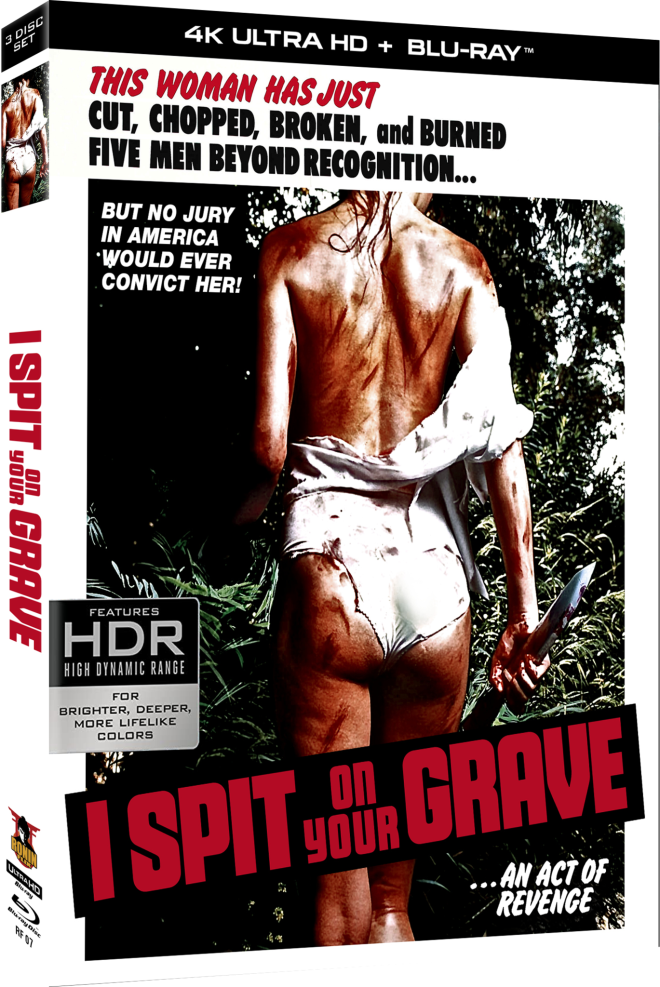 While I absolutely dug everything that Ronin Flix pulled together for their Collector's Edition set, I really only cared about the first film and the documentary. The sequel just didn't do anything for me really, a nice effort but unnecessary. This time around Ronin Flix is keeping things simple and bringing back some impressive artwork in keeping with the original grindhouse marketing. The transfer will be sourced from a new remaster in HDR10 with the 2020 restoration of the original uncut version serving as the baseline.

Right now, this release is ONLY AVAILABLE at Ronin Flix - the SRP is $59.99, but if you pre-order you instantly save $15, so not a terrible price. Pretty much in keeping with some of the deluxe 4k releases from Arrow or Blue Underground.

Here's what you're getting in the package:

In 1978, one film changed the face of cinema forever. Now, 43 years later, the original and notorious I SPIT ON YOUR GRAVE (aka Day of the Woman) is back and still refusing to be buried! In this new limited edition 4K UHD 3 disc set, you can re-experience the phenomenon that shocked and divided the world - and influenced an entire genre and generation of filmmakers - in Ultra High Definition. Featuring a brand new 2021 4K HDR Remaster done by Ronin Flix  on 4K Ultra HD, the 2020 4K scan and restoration of director Meir Zarchi’s uncut 35mm original camera negative and the restored original mono soundtrack on Blu-ray, a bonus Blu-ray including the feature length documentary Growing up with I Spit on Your Grave (2019) and all of the historical Ronin Flix Blu-ray special features, this landmark 4K Ultra HD set belongs in every cinephiles collection.

Camille Keaton (What Have You Done to Solange?, Tragic Ceremony) stars as Jennifer Hills, a young and beautiful career woman who rents a backwoods cabin to write her first novel. Attacked by a group of local lowlifes and left for dead, she devises a horrific plan to inflict revenge in some of the most unforgettable scenes ever shot on film.

"One of the most important films in cinema history." - Brittany Jade Colangelo, Film Critic - Fangoria / Bloody-Disgusting

“I Spit on Your Grave boldly shoves a topic often reserved for hushed whispers out in the open. It’s every bit as exploitative as the title indicates, in subject matter and technique, but [the films] themes remain timeless. No wonder I Spit on Your Grave has remained a pinnacle of the genre.” - Meagan Navarro, Day of the Woman: Meir Zarchi’s Ultimate Act of Revenge

“It's about the strongest 'Take Back the Night' statement ever made. She doesn't just take back the night. She takes back the night, the morning, the afternoon, and steals the clock while she's at it.” - Joe Bob Briggs - Film Critic, “The Drive In”, AMC Shudder