'The Id' Bound for Blu-ray

Director Thommy Hutson's thriller is coming to Blu-ray in October.

In an early announcement to retailers, Hutson Ranch Media is preparing 'The Id' for Blu-ray on October 25.

For decades, Meridith Lane (Amanda Wyss, A Nightmare on Elm Street) has felt trapped in her home. Thriving on memories of youth, she watches the years slip by while caring for her abusive father...until a figure from her past makes a surprising return. In order to live the life she desires, Meridith must confront her father's monstrous cruelty and attempt to escape his tyrannical grip. But the man who controls her every move won't let go without a fight, leading father and daughter into a series of desperate and irreversible acts.

You can find the latest specs for 'The Id' linked from our Blu-ray Release Schedule, where it's indexed under October 25. 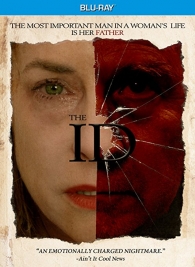 Discs mentioned in this article: (Click for specs and reviews)
The Id (Blu-ray)