Director Mike Hodges' crime drama is coming to Blu-ray in November, and you can pre-order the film here.

In an early announcement to retailers, Hen's Tooth Video is preparing 'Croupier' for Blu-ray on November 3.

All bets are off in London's gambling world when struggling writer Jack Manfred (Clive Owen) accepts his father's offer of a job as a croupier, dealing out the cards of fate and fortune each night to casino patrons. As his relationship with his girlfriend, Marion (Gina McKee), suffers from the strain of his new job, Jack finds his eye roving to a seductive gambler, Jani (Alex Kingston), who lures him into a dangerous robbery scheme with Jack positioned as the inside man. A critical and commercial smash, this delicious British thriller from director Mike Hodges and writer Paul Mayersberg is a solid winner from start to finish!

You can find the latest specs for 'Croupier' linked from our Blu-ray Release Schedule, where it's indexed under November 3. 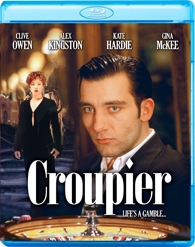 Discs mentioned in this article: (Click for specs and reviews)
Croupier (Blu-ray)