In an early announcement to retailers, Gravitas Ventures is working on '37: A Final Promise' for a Blu-ray release on June 23.

The feature film 37: A Final Promise is a romantic drama based on the true story of former rock star, Adam Webb, who has been tortured his entire life because of something he did as a young boy. Unable to find peace, despite his enormous success, he makes a vow to kill himself on his 37th birthday. 12 weeks before the release of his comeback album and the date he plans to end it all, Adam falls in love with a woman, Jemma Johnstone, who sets him on an unimaginable path as they confront unforeseen end of life issues in a surprising twist of fate. Their love story takes us on a journey and asks us to confront the question: How far would you go to help the person you truly love?

"Every moment of my professional life led to the making of this beautiful and horrifying love story," said Batinkoff. "I have been talking about directing for 20 years, but finally found a story that I simply had to tell. Guy Blews, the author, told me: "if you don't make this movie soon, I'll blow my brains out". It was a bit dramatic, but, we got the movie made. Sometimes the urgency of consequences is what you need to make things happen. Without it, I may have taken another 20 years."

"This film challenges you to think about love, life and mortality," he continued. "It makes you seriously question what you would do if the person you love the most wants to end their life. There are no easy answers and you will probably never know until that time comes."

You can find the latest specs for '37: A Final Promise' linked from our Blu-ray Release Schedule, where it is indexed under June 23. 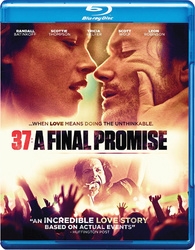