Two thrillers from director Arthur Marks will make their Blu-ray debuts in March, and you can pre-order the discs here.

In an early announcement to retailers, Gorgon Video is preparing 'The Roommates/A Woman for All Men' for Blu-ray on March 24.

'The Roommates' - Four beautiful college roommates and a sexy stewardess are in for much more excitement than they planned for when a summer getaway in the woods turns into a bloody fight for their lives! Looking to spend a swinging summer at Lake Arrowhead, Carla, Beth, Brea, Heather, and Heather's shapely cousin Paula head to the picturesque hills for a little R&R. The usual raised eyebrows from the resort s male crowd follow them wherever they go as they split up and find summer jobs, spend a little refreshing time in the water, and fall into the occasional seasonal romance. But soon a shadow s cast over the girls sunny vacation when a mysterious murderer begins picking off the lake s bevy of beauties. Can the killer be stopped before the coeds summer fun ends in bloody chaos? Find out on the first ever DVD and Blu-Ray release of Arthur Marks THE ROOMMATES!

'A Woman for All Men' - Judith Brown (The Big Dollhouse) is a deadly object of affection in director Arthur Marks (Bonnie s Kids) exploitation shocker, now available for the first time on Blu-Ray and DVD! Karen Petrie (Brown) is a beautiful young woman with a mysterious past. When she becomes millionaire widower Walter McCoy s (legendary actor Keenan Wynn) new beau, it ignites a flurry of jealousy and passion in Walter s two twenty-something sons. Soon Karen s seductive spell is cast on the whole family, including housekeeper Sarah (Lois Hall, Dead Again), leading to a string of deception, crime, and eventually murder. Come see the sexy temptress in action and find out why she is truly A WOMAN FOR ALL MEN!

You can find the latest specs for 'The Roommates/A Woman for All Men' linked from our Blu-ray Release Schedule, where it's indexed under March 24. 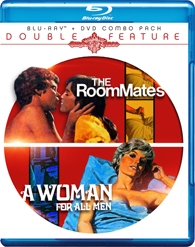 Discs mentioned in this article: (Click for specs and reviews)
The Roommates/A Woman for All Men (Blu-ray)