Studio Ghibli's 'The Tale of Princess Kaguya' Blu-ray Up for Pre-Order!

The latest animated film from Studio Ghibli is heading to Blu-ray, and pre-orders are now live.

In an early announcement to retailers, GKIDS is preparing 'The Tale of Princess Kaguya' for Blu-ray. An exact release date has not been set, but the disc is expected to ship in early 2015.

An old man makes a living by selling bamboo. One day, he finds a princess in a bamboo. The princess is only the size of a finger. Her name is Kaguya. When Kaguya grows up, 5 men from prestigious families propose to her. Kaguya asks the men to find memorable marriage gifts for her, but the 5 men are unable to find what Kaguya ants. Then, the Emperor of Japan proposes to her.

Suggested list price for the Blur-ray/DVD combo pack is $34.98.

You can find the latest specs for 'The Tale of Princess Kaguya' linked from our Blu-ray Release Schedule, where it's indexed under PENDING. 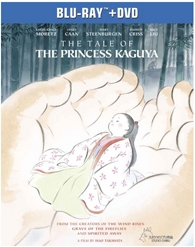 Discs mentioned in this article: (Click for specs and reviews)
The Tale of Princess Kaguya (Blu-ray)