It is a must-have weapon.

Xur is located to the left of the center area, down the stairs and near the Crucible Quartermaster.

For the first time in months, Xur has the Ice Breaker for sale. For 17 Strange Coins, anyone can pick up the Exotic Sniper Rifle that regenerates ammo (there is no reloading ever, the gun charges up to 6 available shots), and thankfully, this weapon starts with a 302 attack (solar) and maxes out at 331. The two unlockable perks are "Missing a shot has a chance to return ammo directly into the magazine," and "Ice Breaker's victims explode dealing damage to others nearby." 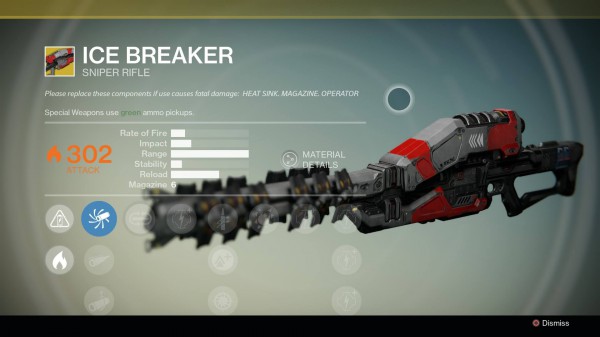 The Ice Breaker is useful for both Raids and for several strikes as its ability to always have ammo is indispensable. It's even fun just to run around and use it during normal play since it doesn't instantly run out like every other 15 round sniper rifle (or 0 rounds if switch during play).

And here's what's up for upgrading this week: