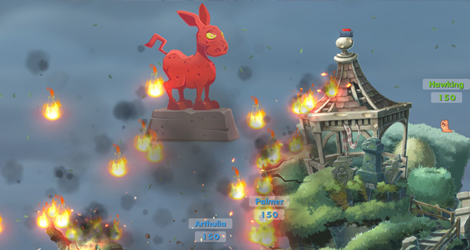 The latest entry in Team17's long-running artillery strategy game is coming out in less than two weeks. Come August 23rd, 'Worms W.M.D' will release on PlayStation 4, Xbox One and PC for $29.99. It's the 21st entry in the core series, and Team17 is looking to freshen up the core gameplay. They plan to do this by introducing a new crafting system for players to experiment with, and reintroducing some classic weapons (such as the ninja rope) that haven't been seen in awhile.

Other new features include a hand-drawn 2D art style, which is a departure from recent outings which featured 3D graphics, and the addition of vehicles such as tanks and helicopters. Team17 told Ars Technica that they wanted to go back to their roots for this iteration, and that they wanted the game to feel like 1999's 'Worms Armageddon.'

Check out the new 2D art style in motion, and the new mechanics, by watching the trailer below:

Those that pre-order will also gain access to the 'Worms W.M.D All-Stars' DLC pack (watch a trailer here) which includes crossovers with several other indie games. 'Rocket League's battle-car will make an appearance, and so will the Dubstep gun from 'Saints Row IV.' Other crossovers include Team17 published games like 'The Escapists,' 'Yooka-Laylee,' and indie hits such as 'Broforce.'

You can find the latest info on 'Worms W.M.D' linked from our Video Game Release Schedule.