Embrace the Division rankings at level 15.

Today, developer FreeStyleGames rolled out a whole new component for 'Guitar Hero Live,' Rivals Arena. This new feature, which is exclusive to the PS4, Xbox One, PS3, and 360 versions of the game, tempts players to show off their skills via a new Division system. That is, on a recurring basis, (40 days for the first season), players can compete, starting from Division 20 and vying for Division 1 status and rewards. To gain access to the Rival Arena features, players must achieve level 15 in GHTV, at which point, two new channels open up, Rival 1 and Rival 2. When playing in those channels, the competition is much tighter. 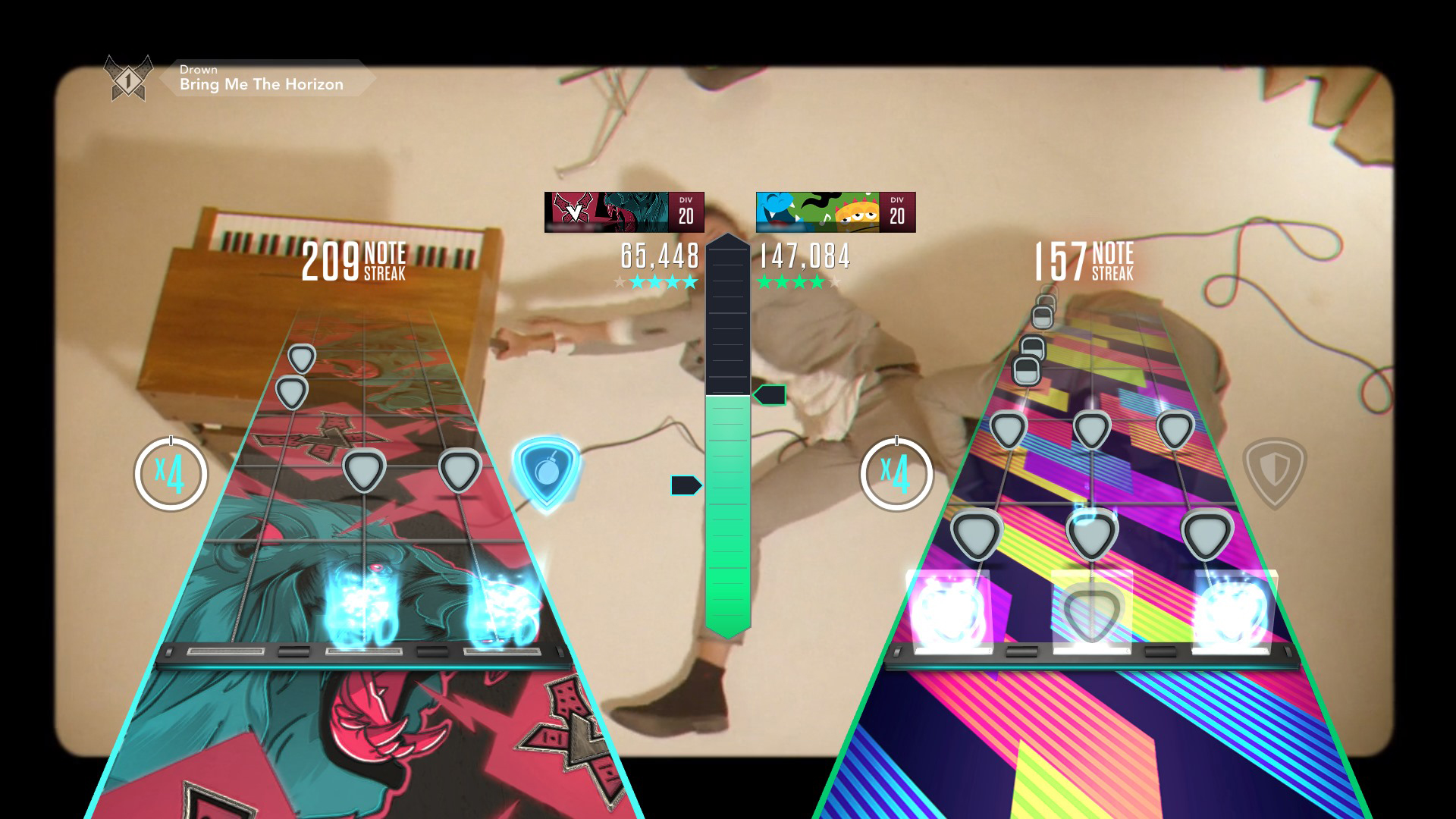 I put some time in today in Rivals Arena on the PS4, and by winning three direct Rival face-offs, I earned three tokens which moved me from Division 20 to Division 19. These direct matches were great. The normal Rival channel play was quite competitive as well. (Nothing like nailing a full combo and still coming in third.) Not only did I have several direct matches that were very close (some I won and some I lost), but I also had some instances of rage quite. (Both for me and my opponent.) I play on Regular, and unfortunately, playing against players on a higher difficulty is just not doable as their scores instantly eclipse mine even when I'm not missing notes. I suffered through one such match only to immediately face the same opponent again. (I quit.) The next match was also hopeless and I dropped out. Finally, the very next match I doing well and my opponent quit (even though they likely could have come back) at which point the game told me to play out the song to secure the victory. (All told, I had 3 skill mismatches out of 10 total matches.) 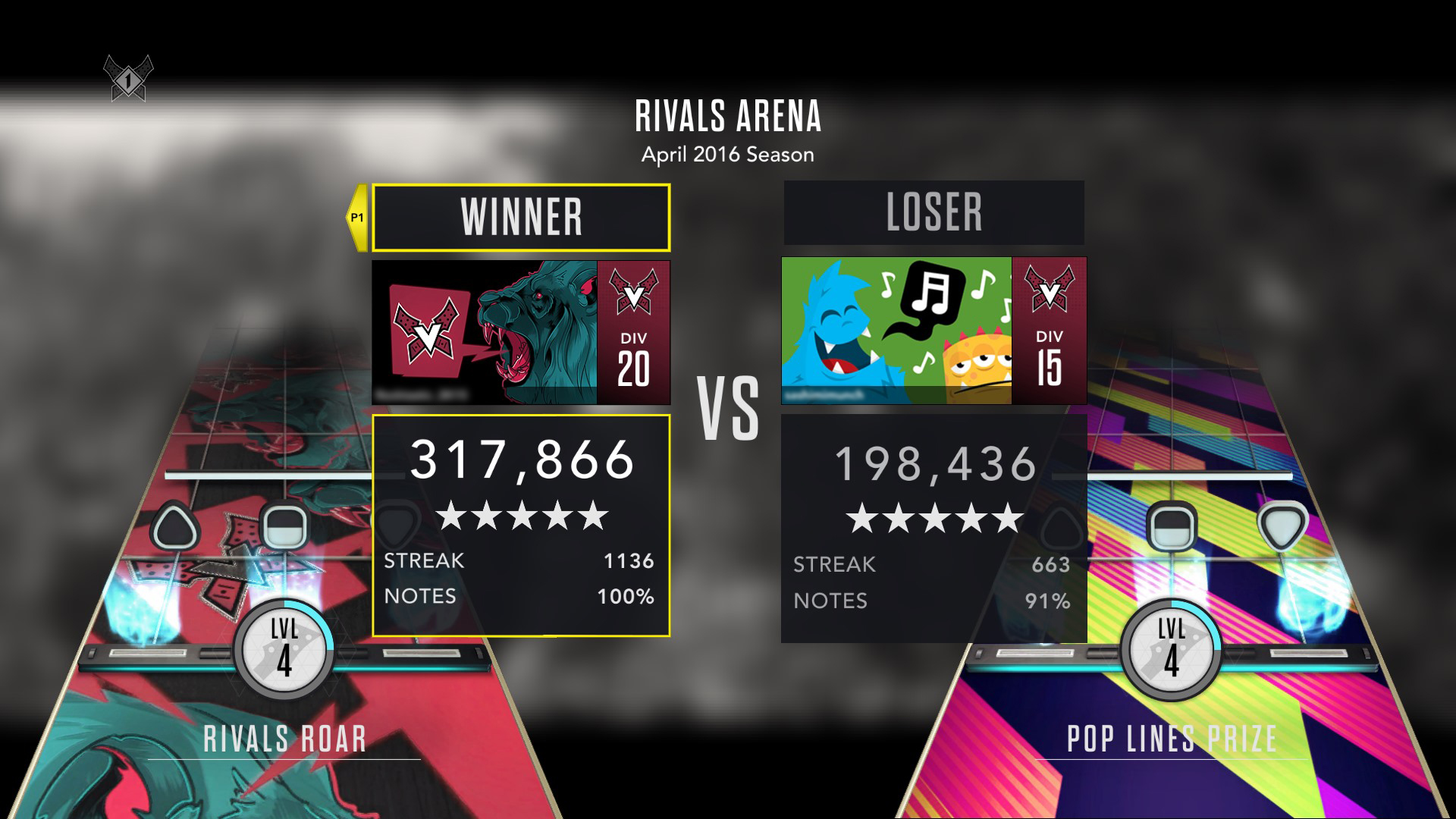 So yeah, I really like this new feature, and I love the competition even though I'm just an ok player. I also would think that in addition to entertaining the more hardcore players, this should also let the regular channels be more friendly for more casual/new players.

From Activision, here's a breakdown of how the features work:

Rivals Arena is a reoccurring, month-long 1v1 battle where players compete to rank up from Rival Division 20 to Rival Division 1. Each victory allows players to climb the ranks and gain more tokens. Rank in the top ‘Rivals Arena’ players in the world and earn unique rewards along the way!
Players unlock ‘Rivals Arena’ feature by reaching Level 15
-Two new Rival Challenge channels will launch on GHTV
-Monthly seasons will pit players against others as they rise to glory from Division 20 to Division 1
-Win battles to move up Divisions and earn tokens
-Bonus tokens will be awarded to those with winning streaks and to those playing consecutive matches
-Season exclusive rewards can be won if players reach Division 15 and higher This includes: exclusive player cards at Division 15, exclusive highways at Division 10 and a legendary-looking version of the player card
-New seasons will use previous season data and status to determine starting Divisions, giving returning players a head start