Envy the Dead: A Look at 'Sheltered,' the Post-Apocalyptic Survival Fallout Shelter Simulator on the Xbox One

In June 2014, a company called Unicube opened a Kickstarter for a 2D pixel art survival game, 'Sheltered'. The campaign was successful and a stretch goal teased the possibility of an Xbox One release. Now that the game is in the Xbox One Preview Program, we thought we’d take a look and see what Unicube has to offer in the oft-visited realm of post-apocalyptia.

In 'Sheltered', the player is tasked with assisting a family of four survive during the early days of a global nuclear event. Unlike the vast majority of the hoi polloi, said family has access to an underground fallout bunker that, if suitably managed, can protect them from most of the dangers of the outside world. However, the shelter is not remotely self-sufficient, at least not at first. Family members must make forays into the dangerous, irradiated wasteland to find crafting materials. Without them, the shelter cannot build animal traps, upgrade its equipment, or create new rooms. 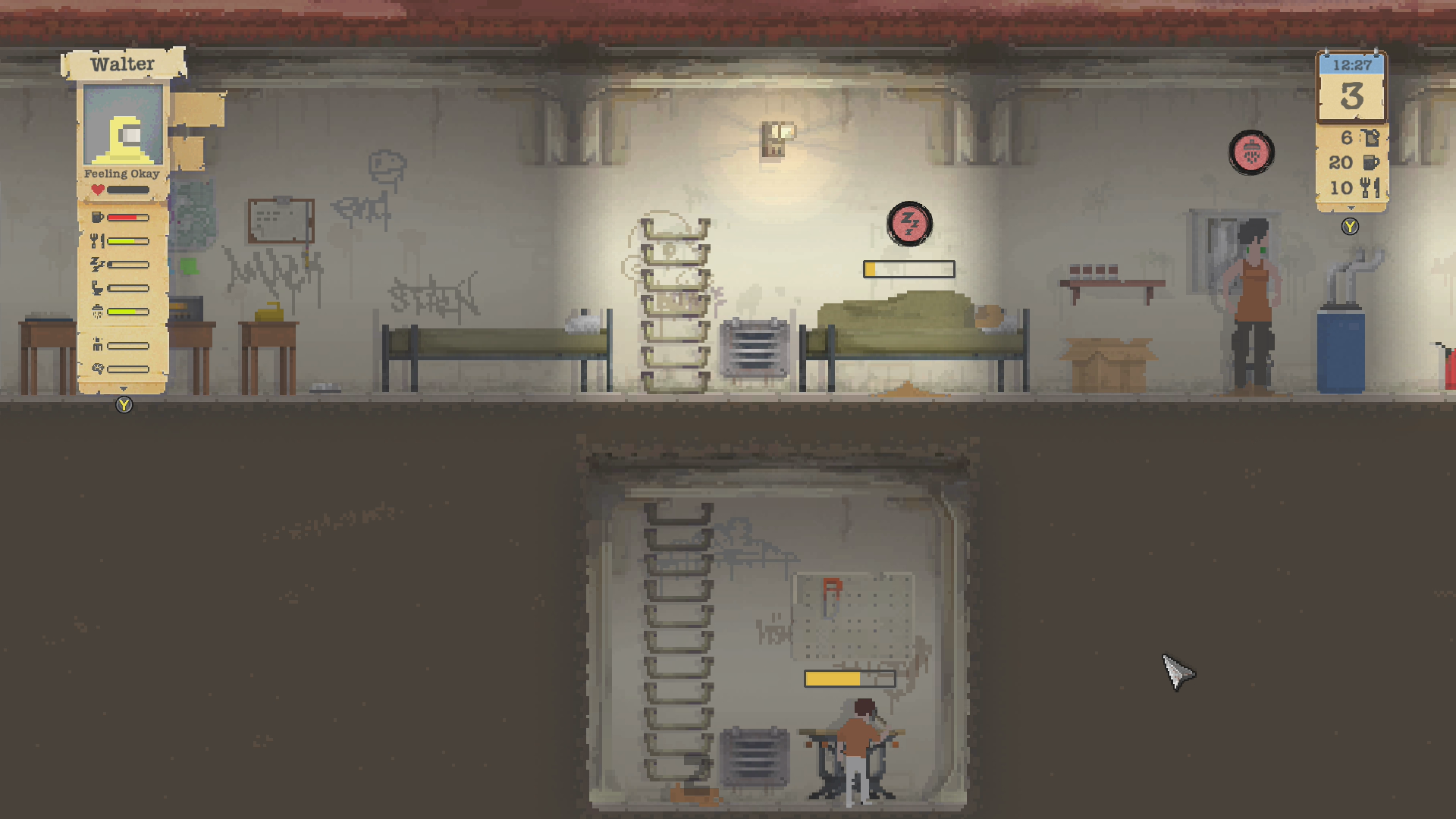 The behavior of all four survivors is micromanaged, right down to how often they use the toilet (using the toilet requires water after all, and water doesn’t grow on trees). A 'Sims'-like menu kept me informed as to each family member’s needs, with bars for hunger, thirst, stress, and so on. Thematically the game feels a lot like a love child of 'Oregon Trail', 'Fallout' and its predecessor 'Wasteland', and especially 'This War of Mine'. It is quite hard, almost hopelessly so. In each playthrough, I made it to around day 10 before my family disintegrated in famine and disease, and they were suffering from crippling, violence-induced catatonia for several days before that time. Meeting other survivors in the wastes often leads to a physical altercation as desperate humans fight over scarce resources, and for my fragile vault dwellers, this meant a quickly deteriorating mental state, not to mention their medical injuries. 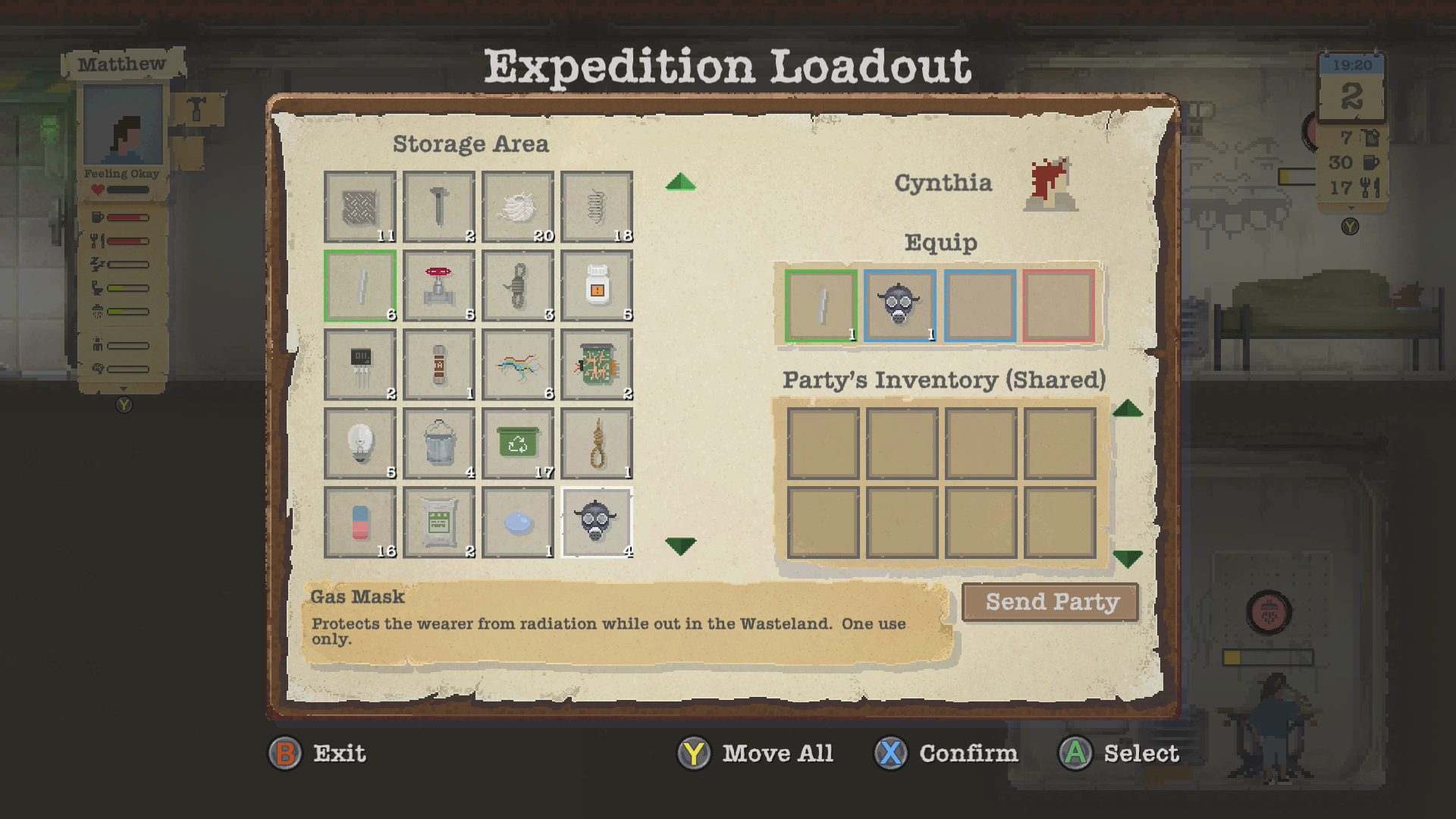 Whenever I sent someone out of the shelter, they typically came back empty-handed, and after drinking all of our potable water to boot. This wouldn’t have been much of a problem if it would ever rain, as purified rainwater is the most important resource in the shelter. Without it there is no potty and no hygiene, no sallying forth to collect supplies (including bottled water), and no hope for any kind of future as living people. Fortunately, it would seem that many others have been experiencing the same issues, as just today Unicube declared a new update that ensures more frequent rain, a higher chance of finding certain crafting materials, and more gas masks (a necessity for radiation-free excursions). This is one of the benefits of public beta testing, I suppose - the squeaky wheel gets the oil, and 'Sheltered' desperately needed some oil. 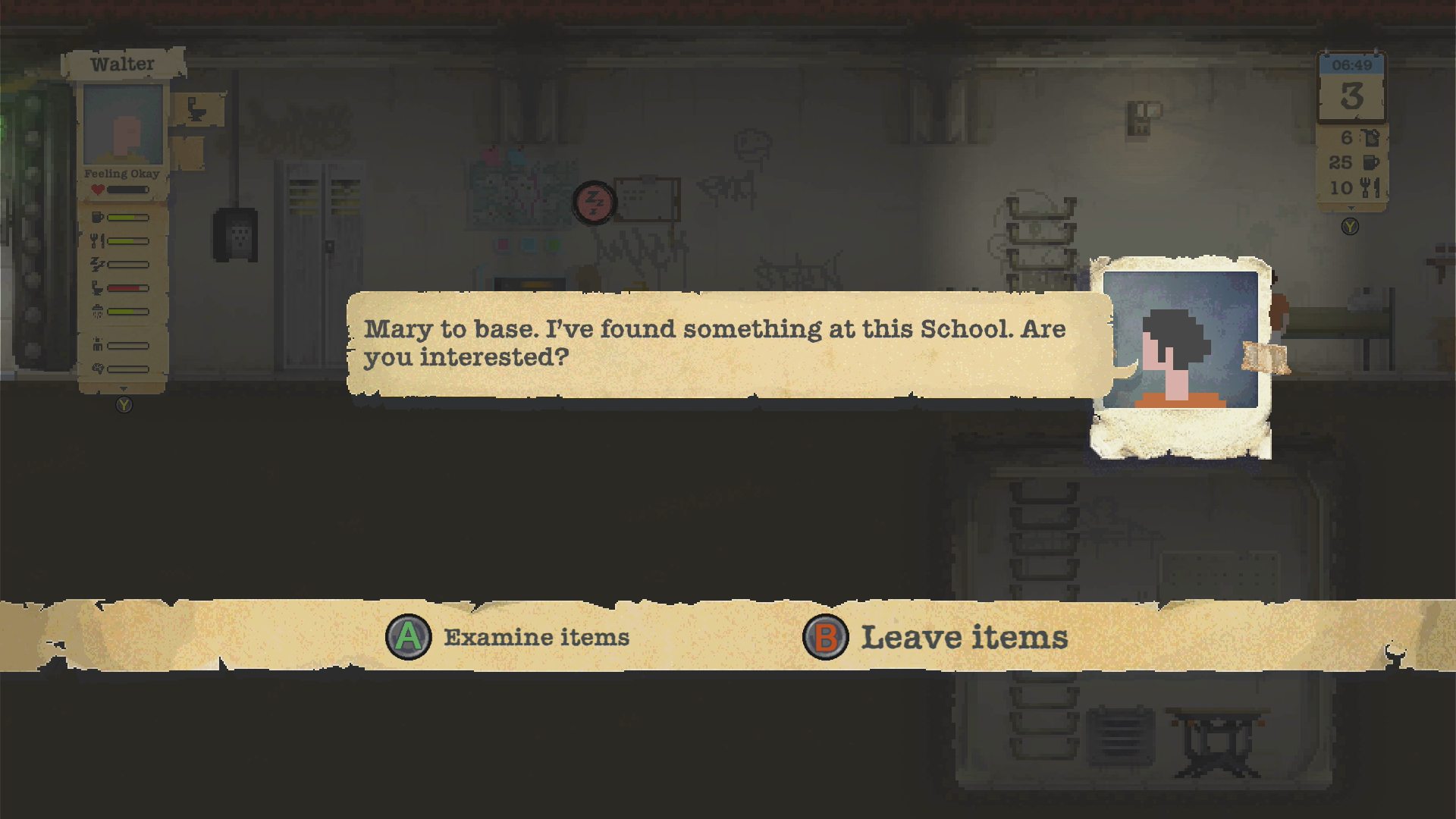 Its problems aside, I do enjoy playing 'Sheltered'. Like 'This War of Mine', it brings a welcome element of humanity into the survival/strategy genre, even if that element is dark and depressing. I watched in horror as my sick family members vomited green pixels onto the floor, and without cement to create new rooms or enough supplies to clean it up, my other family members had to sleep in it. The family cat nearly died when our food was running low, which is odd because he kills rats all the time and I’m not a veterinarian, but I feel like the little beggar should eat the rats and not be a burden on the family. Perhaps some gamers would not classify these experiences as "fun", but the satisfaction of having all of my family in an almost-healthy state is very gratifying. 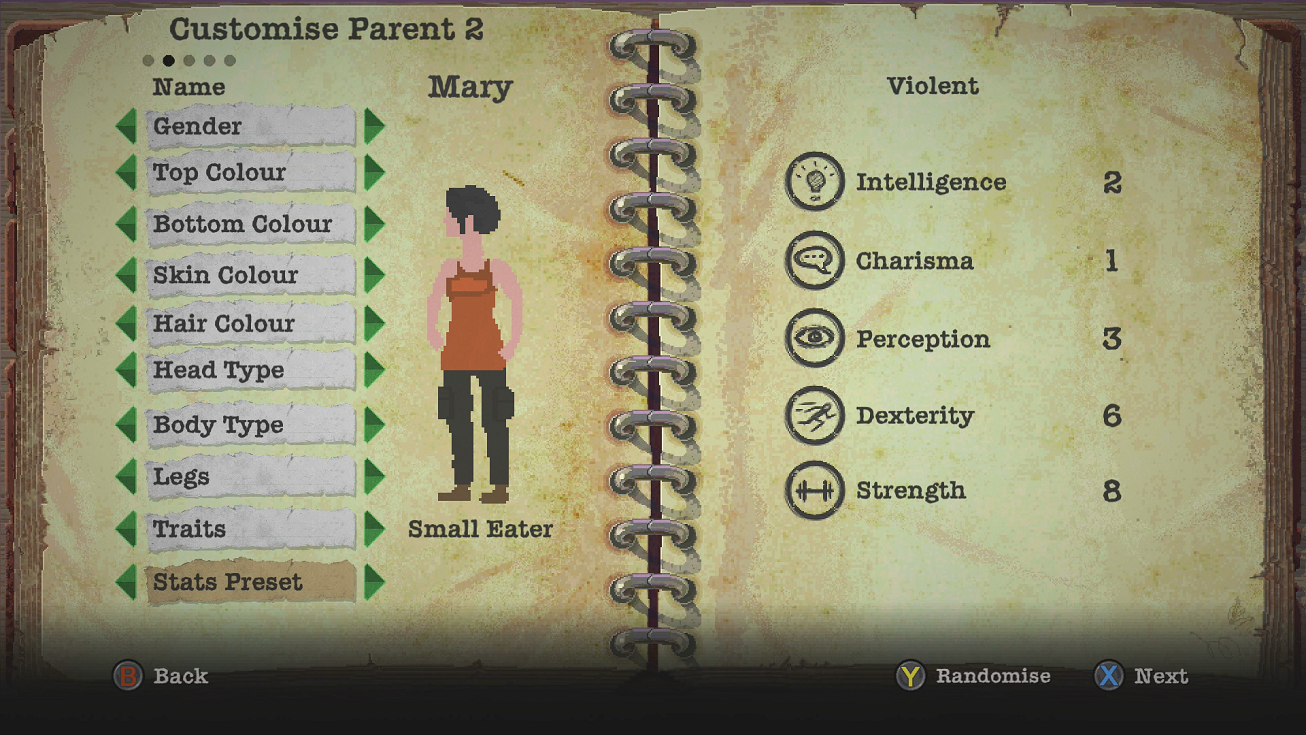 The game uses a 2D pixel art style, and the shelter is a side-view cutaway in the vein of an ant farm. Movement is not freeform - the sticks only control the camera, not the characters, which must be moved with contextual clicking. When one of them loitered in front of the water barrel, it became problematic for other family members to access it. As a workaround, the loiterer had to be told to do something else, and then that action was cancelled after they’d moved far enough away. The controls seem to have kept the PC scheme and lack some welcome adjustments on the Xbox One. 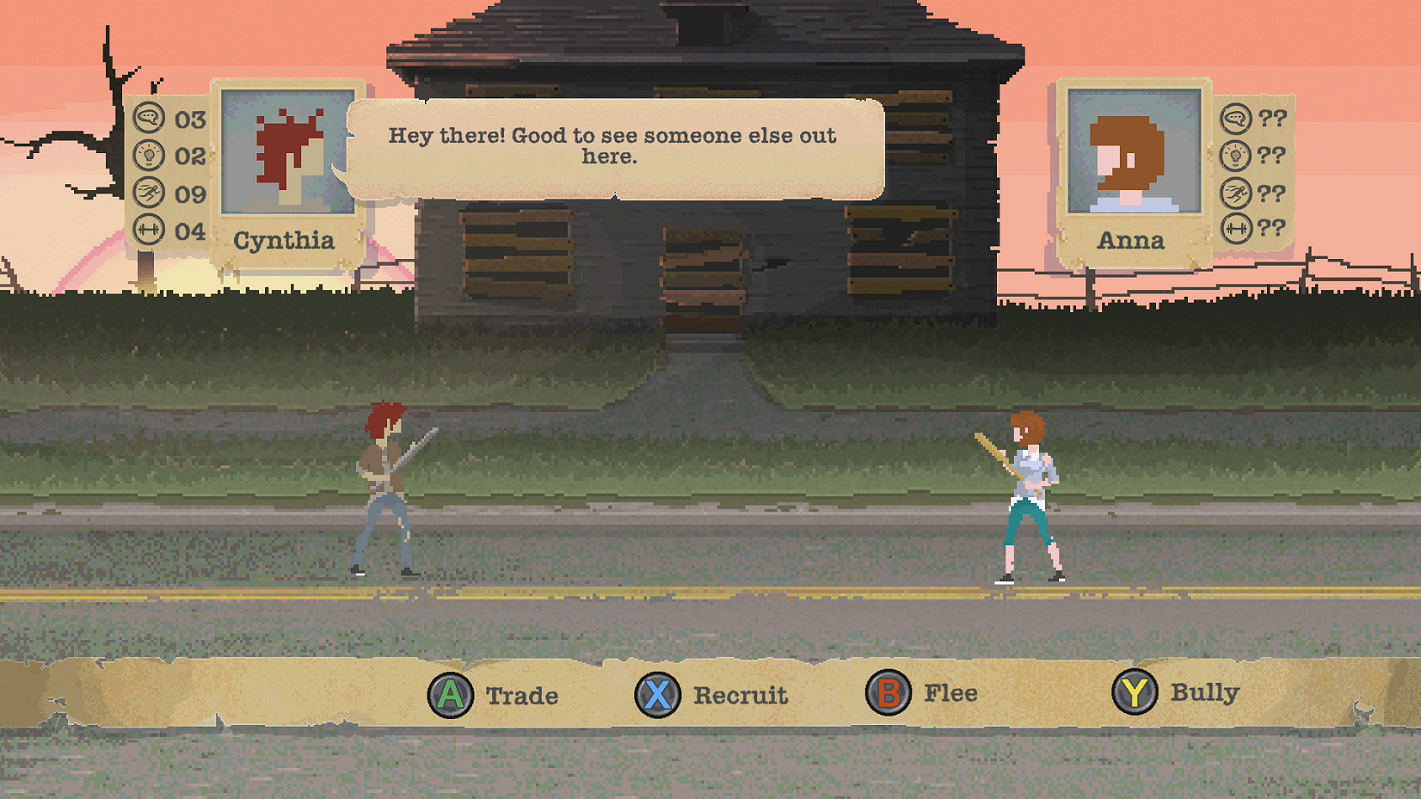 'Sheltered' has some problems that aren’t uncommon during an alpha/beta stage, but none of them are beyond fixing. The Kickstarter campaign also promises several other modes and features, like more customization in the shelters, a cutscene of the current game’s key moments, and a wanderer mode ('Oregon Trail' style, always moving, no shelter). There is no word on when they will be included, but the game already has a great deal of replayability and an addictive quality. I hope the best is yet to come.