The New 'King's Quest' Hits on July 28th, But That's Only the Beginning

Sierra, a namesake familiar to the golden era of PC gaming and now resurrected by Activision, is bringing the new 'King's Quest' to bear on July 28th. 'King’s Quest: A Knight to Remember' will launch as first on the PS4, PS3, and PC, and will be followed the next day on July 29th on the Xbox One and the 360. It will be priced at $9.99 on all platforms, but wait, there's more.

Sierra is bringing 'King's Quest' back as a five chapter series, which makes 'King's Quest: A Knight to Remember' the first chapter. There is a bundle, and it will not only include the five chapters but also a future bonus playable story epilogue. This bundle has been dubbed 'King’s Quest: The Complete Collection,' and is being priced at $39.99. (Preorder here.)

As for that first chapter, here is description from Sierra,

The first entry in a planned five-chapter arc, King’s Quest: A Knight to Remember sets the stage for an unforgettable journey to come with original places, puzzles and personalities to discover. As an aging King Graham reflects on a life of adventure with his granddaughter, Gwendolyn, King’s Quest transports players back to the untold tales of Graham’s youth to experience a story that bridges generations.

You can find the latest info on 'King's Quest' linked from our Video Game Release Schedule. 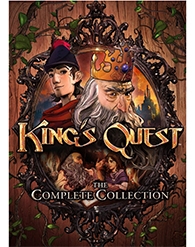