Is 'State of Decay: Year-One Survival Edition' the Xbox One's Next Smash Hit?

It won't be long now.

Take a gander at the upcoming Xbox One releases, and one obvious stand-out has to be 'State of Decay: Year-One Survival Edition.' It's an openworld game of survival that is well, full of decay, and it's a game that has been vetted to death on the 360 and PC. For current owners on the 360, they can upgrade to the new Xbox One version at a 33% off discount and bring over their saves. Plus, they will get an exclusive hero, Gurubani Kaur, who comes with exclusive weapons.

The new game is 1080p at 30fps, but really it's about wading in among the survivors and newly dead and making the most of the supplies at hand. Developer Undead Labs hosted a live stream this week, and the craziness that ensued seems like a perfect storm for the Xbox One. And that's without any kind of multiplayer.

The preorder bonus for Amazon includes the Prepper's Pack (which most preorders do) and the Android box-cutter. The Prepper's Pack will include the SUV, SKS Firearm, and Folding Axe. The Android is a next-gen box cutter with an ergonomic grip and "perfectly angled" blade that never wears out.

You can find the latest info on 'State of Decay: Year-One Survival Edition' linked from our Video Game Release Schedule. 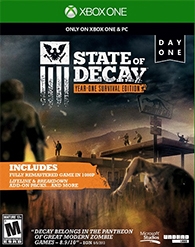