Square Enix has announced that 'Final Fantasy Explorers' is coming West, and with it comes a four player co-op dungeon crawler packed with loads of 'Final Fantasy' trademarks.

Players will jump in with support for up to 4 player co-op, and for each player it's all about the job system. Not only are there over 20 jobs available (jobs such as Knight, Monk, Black Mage, etc.), but players also have eidolons summons, through which classics like Bahamut can enter the fray.

Eidolon summons are pretty standard for a 'FF' game, but in 'Final Fantasy Explorers' players will also be able to transform into series' stars like Cloud via the Trance feature. The game's overall structure is a party gathering crystals and in search of the Grand Crystal.

'Final Fantasy Explorers' is due out in North America on January 26th.

You can find the latest info on 'Final Fantasy Explorers' linked from our Video Game Release Schedule. 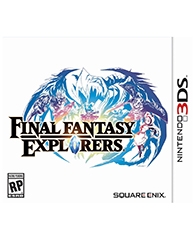