For generations, Godzilla and his Kaiju brethren have been a marvel of cinema, and now the entire cadre has come to the PS4 in playable form. With 'Godzilla,' Bandai Namco and developer Natsume Atari Inc. have promised that players will be able to control the larger than life Tokyo destroying/saving beast as well as 20 other Kaiju, including Anguirus and Rodan. The game has multiple iterations of Godzilla ranging from 1964 as the way to 2014, who has been dubbed the "Hollywood Godzilla."

GODZILLA features multiple game modes including; Destruction Mode where players can deal massive amounts of mayhem and lay waste to more than 20 different stages. Diorama Mode enables players to place models of Godzilla and the other Kaiju in different settings to capture epic photos through the use of the SHARE function on the PlayStation®4 system. Players can also enjoy the King of Kaiju Mode where Godzilla fights his way through a gauntlet of the franchise’s most famous monster enemies to reach the top of the Kaiju hierarchy and reign supreme on the throne as the true King of the Monsters. PlayStation®4 system players can use any Kaiju in any mode, including an Online Multiplayer Mode that enables for up to three players at once fighting in all-out mayhem.

There is also a scaled down digital-only version of 'Godzilla' now available on the PS3.

You can find the latest info on 'Godzilla' linked from our Video Game Release Schedule. 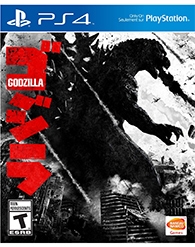