Could be another runaway party success.

Jackbox Games, the developer the unrivaled party success that is 'Fibbage,' elected to take to Kickstarter in order to create a new party zany party game. That game is 'Quiplash,' and like other recent Jackbox Games' releases, 'Quiplash' allows for multiple players without having to use multiple controllers. By using smart phones, tablets, or PCs, and the jackbox.tv web link, up to 8 players can into a 'Quiplash' match.

'Quiplash' is all about picking the right (or funniest, or stupidest) answer, and to figure out what that is, 'Quiplash' relies on voting, and here's where the numbers get crazy. In 'Quiplash' and through the simple jackbox.tv link, up to 10,000 players can vote on the correct answer. 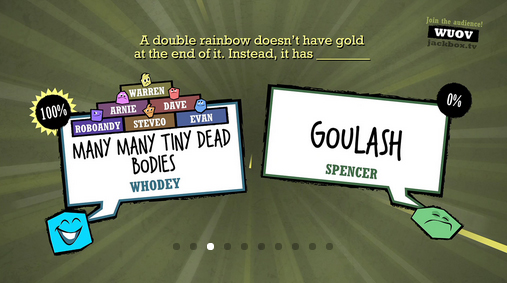 Much like with the games of the 'Jackbox Party Pack,' 'Quiplash' is mean to work with a party of people form just a few to, well, thousands.