Don't get voted out of favor.

After months of teasing, Kalypso is finally showing off footage of the first ever PlayStation bound 'Tropico' title, 'Tropico 5.' (Check out the review of the 360 version here.) Veteran players will recognize how important the role of El Presidente is to the fledging island nation, but newcomers should also know that 'Tropic 5' is the perfect place to start as it features the prettiest, most robust, and engrossing version of the game to date.

In the gameplay footage, the nature of the PS4 version is clear. A large circular cursor will help bridge the gap between DS4 and mouse.

In 'Tropico 5' players become city builders, political policy setters, fierce diplomats, and in all likelihood, outright dictators. Their island can house missiles, host llama herds, or attract tourists- or it can do all three, just don't ever push the people so hard that they demand El Presidente's head.

You can find the latest info on 'Tropico 5' linked from our Video Game Release Schedule. 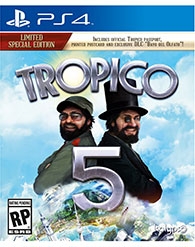