There is a newly produced, fully-voiced set of dialog voice acting for the game. There are console features, like two player controller support and splitscreen co-op that will be in the PC version as well. Plus, there is now DirectX11 support. The game has been expanded both in terms of quest content and in terms of combat options (dual-wielding!). The new difficulty options should help both veterans find challenge (crazy stuff) and those altogether unfamiliar with the genre.

Heck, even the companions will talk to each other in classic oil and water fashion.

Here's a summary of changes from Focus Interactive:

Divinity Original Sin: Enhanced Edition comes with lots of new content to make your journey through Rivellon more exciting than ever. We have thousands of lines of dialogue now fully voiced by AAA voice actors Alix Wilton Regan and Alec Newman, as well as hours of new content including quests, combat-styles, locations, changes to the crafting system and a reworked storyline. Divinity: Original Sin is bigger and better than ever before!

Bring RPGs back to the living room with dynamic split-screen support for consoles (and PC including SteamOS). Enjoy side-by-side co-op play with friends, family, and demons summoned from otherworldly planes.
Tired of your mouse and keyboard? Get full controller support for one and two players on all major platforms (PC, Mac, Xbox One, PS4).
Hear the world come alive with full AAA voice-overs for all characters.
Enjoy a bigger and better story, with new quests, locations, characters and dialogue. (Includes a reworked and expanded plot with a brand new ending!)
Discover new battle styles with Dual Wielding, Wands, Grenades and more.
Try new game modes including Explorer Mode (novices or those who want to focus on the unfolding story) and Honour Mode (for experienced tacticians ready to face brutal encounters, puzzles, and new monsters).
New and improved user interface, graphics, animations, sounds, and visual effects.

Many of the game's systems have also been seriously reworked. From magic leveling to merchant offerings, players should expect major changes across the board.

To help players embrace the co-op RPG, each player will get to choose their own difficulty setting. 'Divinity: Original Sin Enhanced Edition' is coming to the PS4. Xbox One, and PC next week. 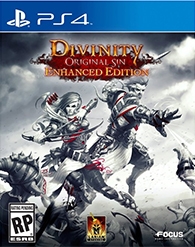 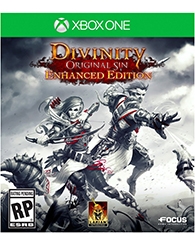