Meet 'BOID,' the RTS That Does Away With Base-Building

From Mokus Games and tinyBuild comes 'BOID,' an RTS currently in Early Access on Steam. tinyBuild Games first entered the market with the Kickstarter-propelled 'No Time to Explain' two years ago before sprouting into a publishing partner for indie games, and 'BOID' is one of their latest. Mokus Games is known for the pretty 'Contre Jour,' but with 'BOID,' the ante has been upped considerably.

tinyBuild's Luke Burtis, a former professional 'Warcraft III' player, prides himself on having placed 31 out 32 in global 'Warcraft III' competition and subsequently pursuing game development over esports. 'BOID' is the partner-publisher's first RTS (and a favorite of Luke's), but there's more to the game than just a streamlined design. Though it's in Early Access on the PC, it has the potential for a 4G future, and has been developed with the mouse, the Steam controller, and the touchscreen in mind. (Editor: Brian Hoss)

'BOID' is described as an RTS without base management. This is somewhat unusual, as base management is traditionally an integral component of the RTS genre. Each match is played on a two-dimensional board and the player controls an army of squiggly little sea creatures. The sea creatures spawn in special areas where they can then be moved into designated bases, which all consist of small circles. Once in a base that they control, the creatures will transform into that base’s class - tanks, healers, gunners, etc. The objective is to control every spawning pool on the map. 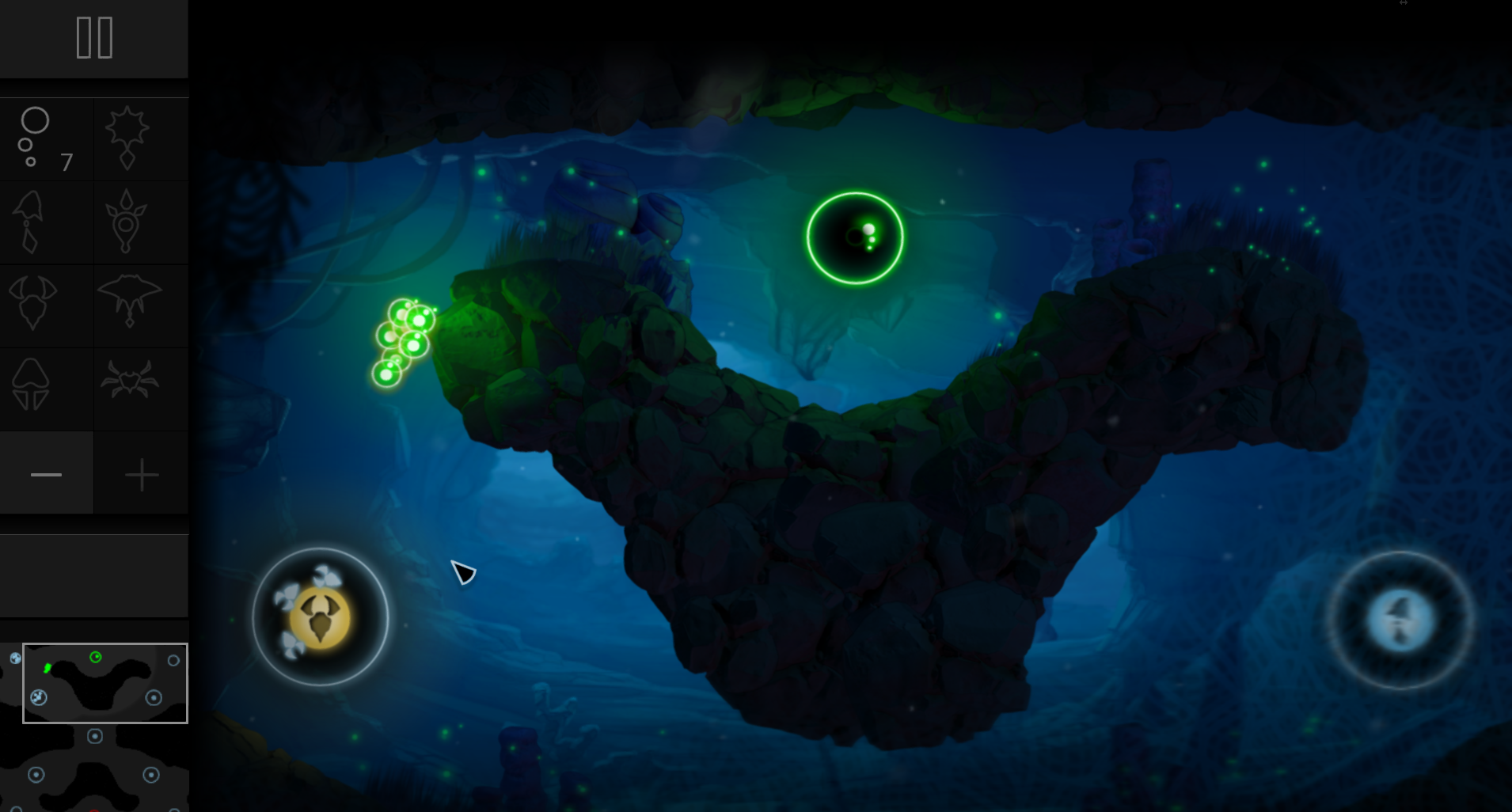 It is essentially an extremely fast-paced game of king of the hill, but with several hills per map. The only resource that must be managed are the basic spawned worms. They float around in their spawning pool until moved to a strategic location or transformed into more specialized units. True to the devs’ promises, bases cannot be built, moved, or upgraded - they are static and can only be owned or not owned by the player. 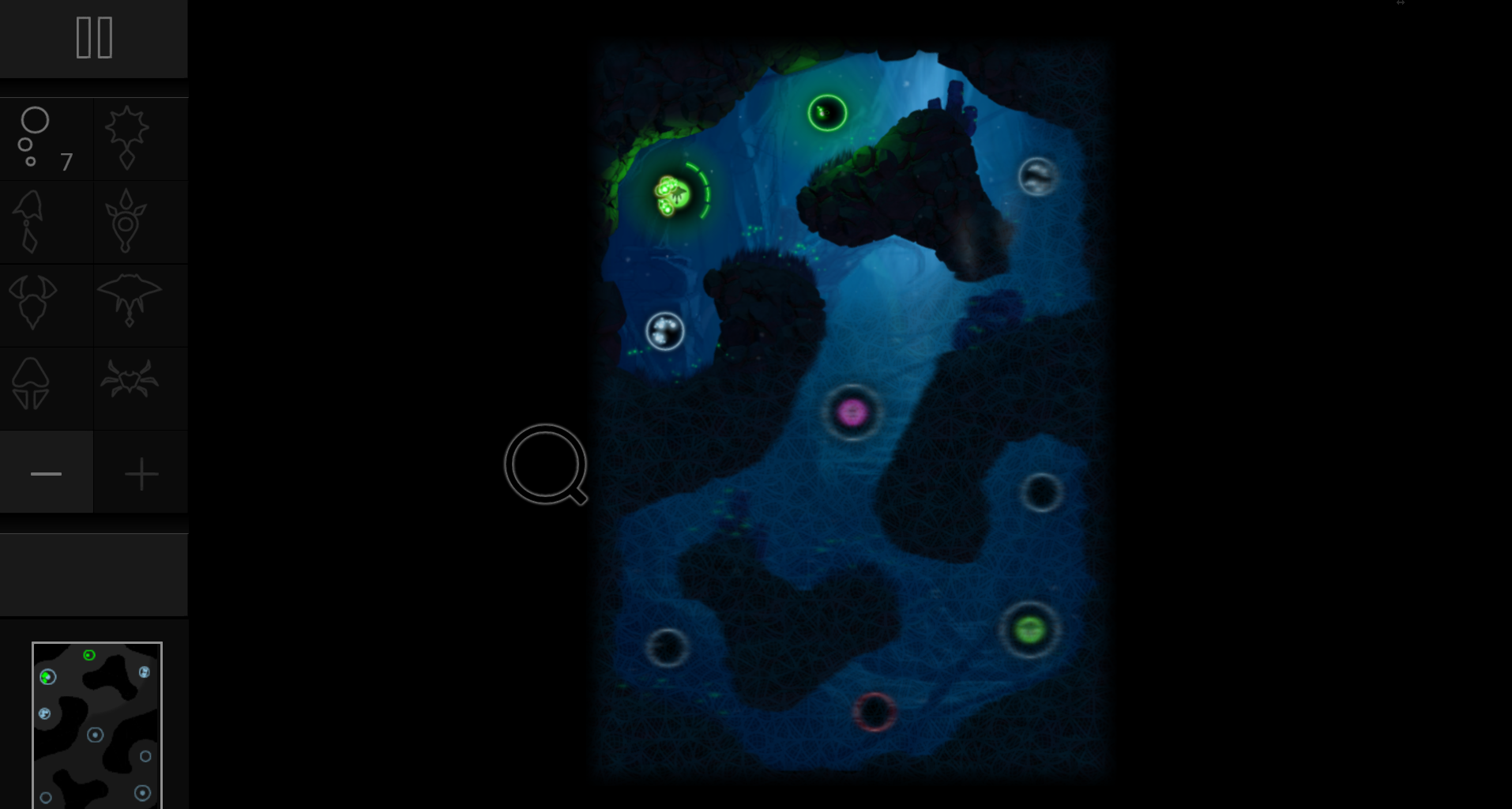 It can be difficult to mix and match fighting forces, because the wormies have a way of all getting jumbled together when assaulting a base, then they all transform into one big homogeneous blob. The only other main issue is that the "zergling rush” - a tactic in RTSs where a player forms a huge force of cheap, expendable units at an enemy - seems to be the only path to victory in many circumstances. It is also heavily favored by the AI. Despite these issues, 'BOID' is very fun and accessible. The single-player mode can be quite challenging, even on the easy difficulty level, as it forces players to constantly move, upgrade units, and take new bases. There’s no resting on your laurels here. Whenever I took a quick breather to rebuild my forces, I would be zerglinged upon by the enemy. I learned to keep a constant flow of new troops into the bases and onwards. Momentum is critical in 'BOID'.

Currently there are only a half-dozen maps in the single-player, in addition to the multiplayer. A map editor has been promised for the full release. Multiplayer has issues connecting, and so most of my time was spent in single-player. Each match takes only a few minutes so gaining experience is quick, but plowing through all of the content available is also very quick. The Early Access price is a meager $3 but that may change upon full release. 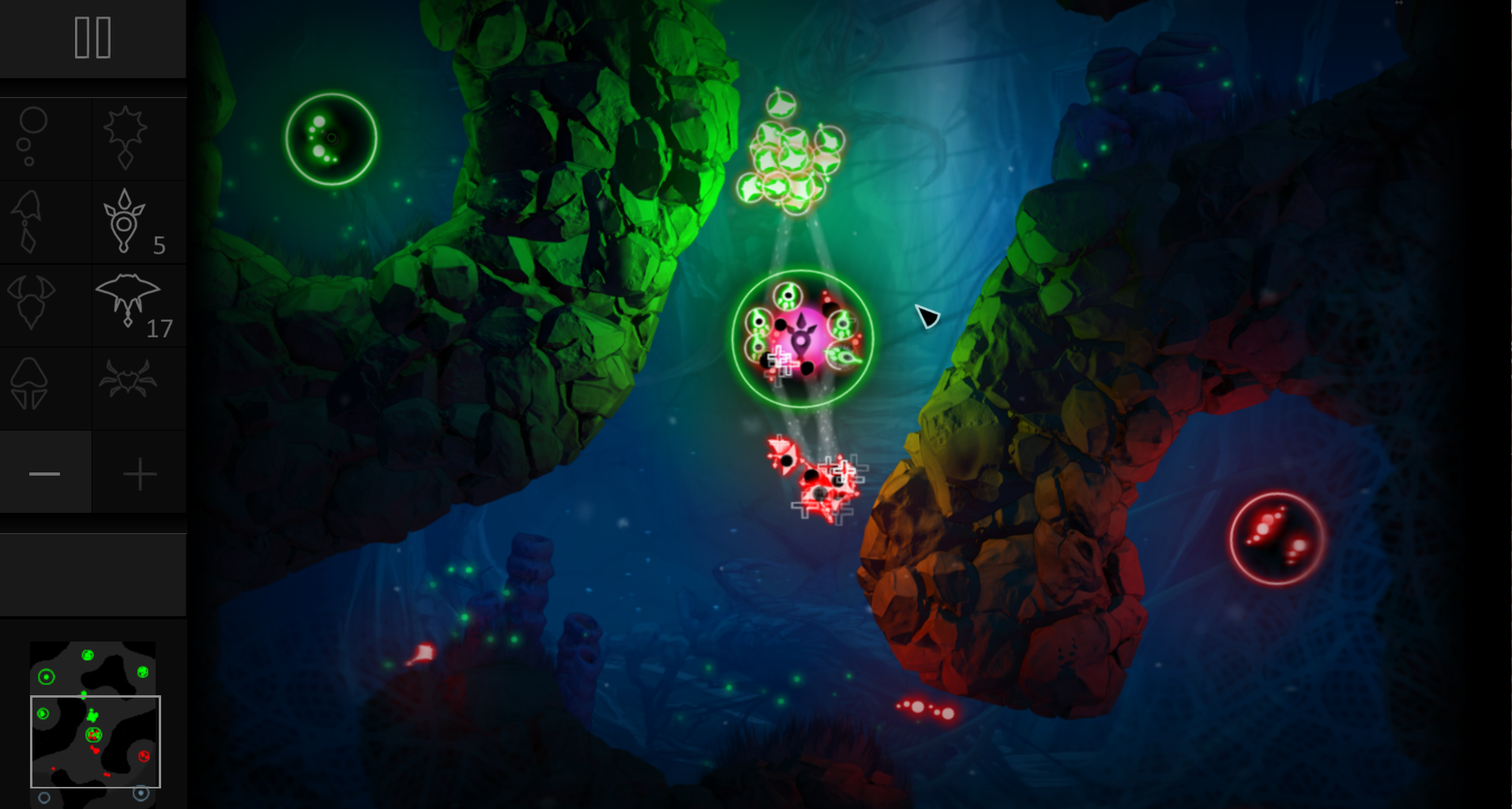 This game reminds me a lot of 'flOw', a brilliant and simple simulation where the player’s only interaction is to chase and eat sea creatures. The underwater environments are small but pretty. Backgrounds have an eerie, hand-painted look. The foreground has stronger lighting and particle effects than I expected. Despite the limited color palette and the rough, obtrusive interface on the left of the screen, 'BOID' looks lively and vibrant. The camera poses some problems - the cursor won’t always scroll past the edge of the current screen, forcing a zoom-out and then a reposition. 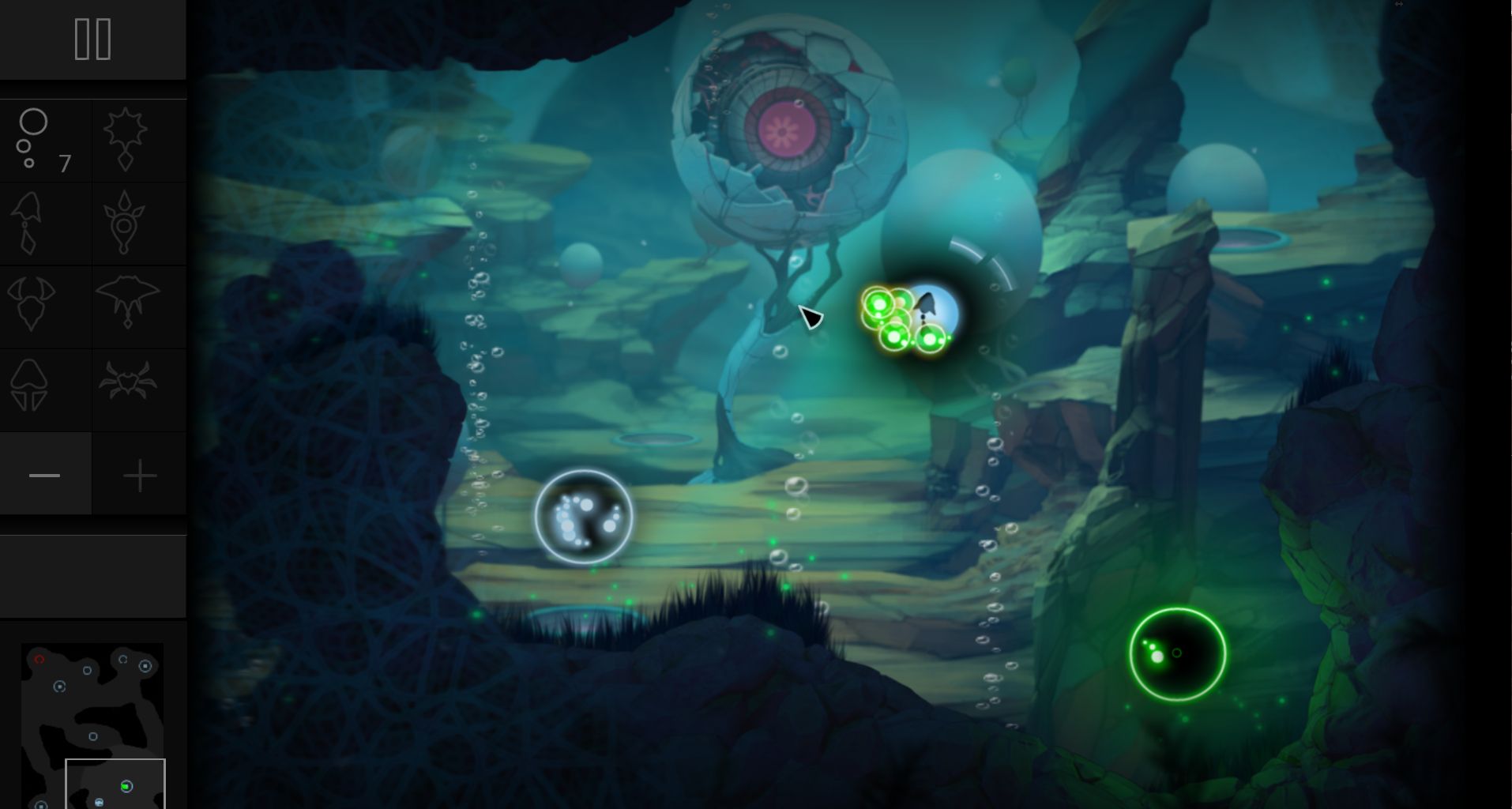 'BOID' currently has little audio. A primordial, tribal drum fill plays during the menu, and cutesy acknowledgements can be heard on mouse clicks during matches, but that’s it for the moment.

Because it isn’t in a release state yet, 'BOID’s' content is a bit thin. I shot through the levels quickly and, in between long periods of fruitless waiting for multiplayer connectivity, punished myself with bouts of hard mode. The map creator should bring a sizeable replay component when it’s ready. A four pack of 'BOID' is only $8.99 right now, so ensnaring a foursome of friends might be the best way to go. 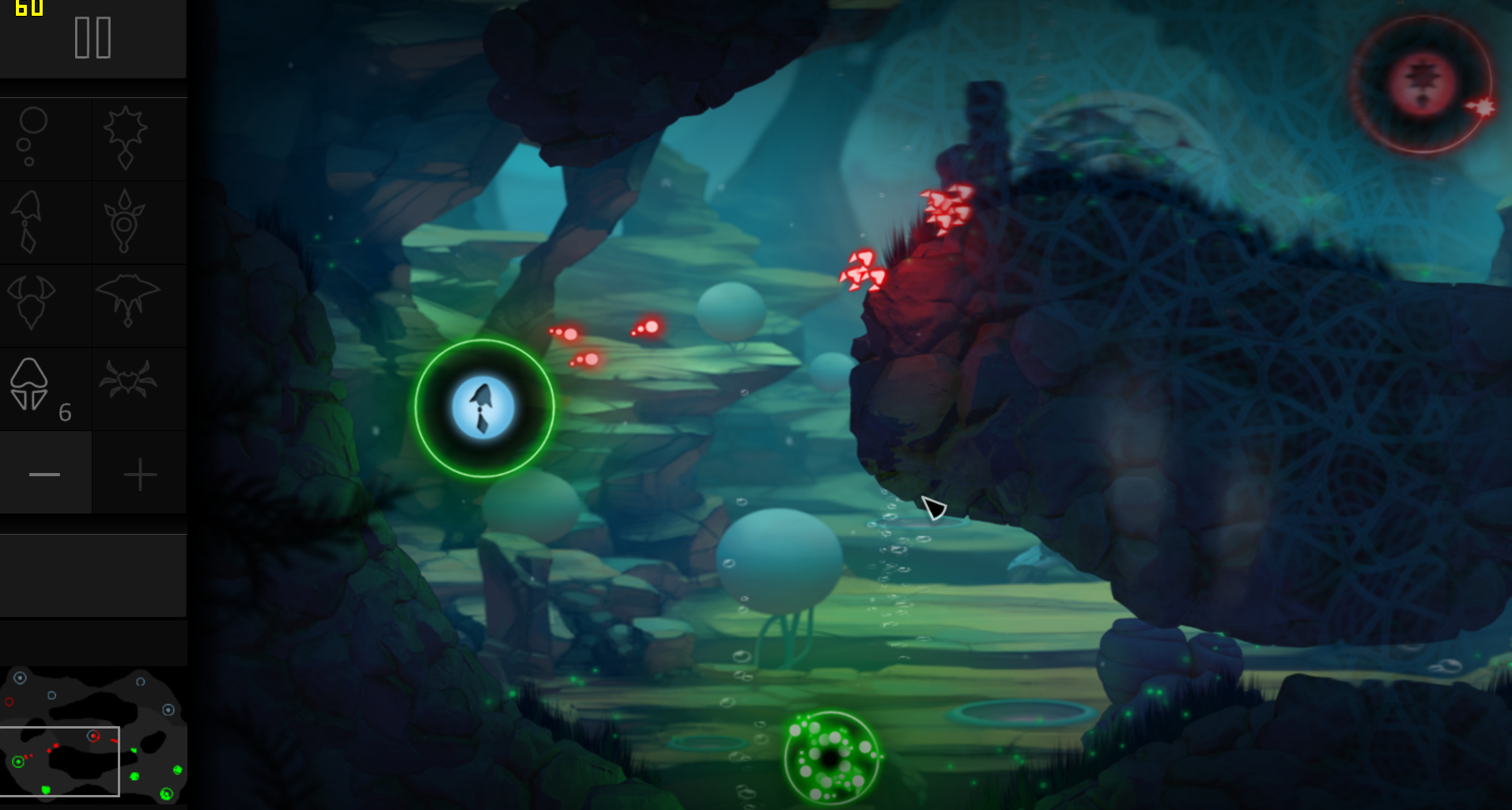 'BOID' is a promising and challenging RTS that is alluring in its charm and innovation. I hope that the use of Steam’s Early Access program will help to build a community ready to devour its map editor upon release, which has real potential for emergent gameplay and vast content creation. Until then, it is a fun diversion to spend a few hours and $3 on.