Team K' is surprisingly led by the cyborg Maxima, not the titular K', a fighter who has been cybernetically enhanced with Kyo Kusanagi's DNA. Rounding out the squad is a skilled ice skater turned assassin named Kula Diamond. All three members used to be a part of an evil organization called NESTS, but are now trying to take down the syndicate.

Team Women Fighters is naturally comprised of three powerful female entrants (thankfully there wasn't a twist like with Team K'). 'Art of Fighting's King, a talented bartender has teamed up with the highly skilled ninja Mai Shiranui. The final member of the squad is Alice, a mega fan of Terry Bogard and Joe Higashi, who attempts to blend their fighting styles.

You can find the latest info on 'The King of Fighters XIV' linked from our Video Game Release Schedule. 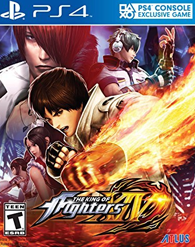