Today, Bandai Namco has confirmed that 'Sword Art Online: Hollow Realization' will be heading to PS4 and Vita in the US and Europe in 2016.The game is a sequel to this year's 'Sword Art Online: Lost Song', but sees a return to the MMO-style gameplay of 'Hollow Fragment'. 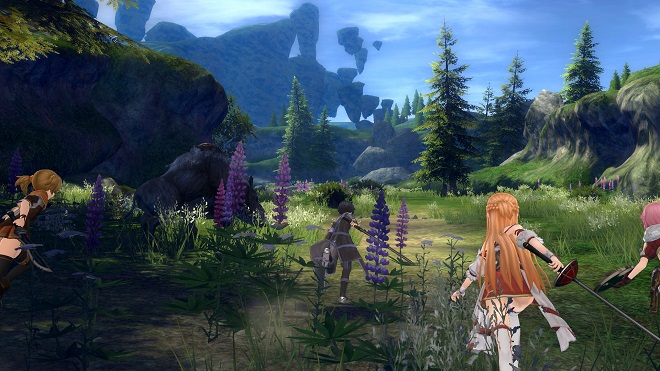 The game sees players entering a new VRMMO not yet seen in the franchise called 'Sword Art: Origin', and whereas 'Hollow Fragment' only allowed parties of yourself and one other character, 'Hollow Realization' now allows for four characters in a party. The combat, while still keeping the MMO aspects of 'HF', also now allows for more direct control over your character. getting rid of the auto attack system seen in that game.

As someone who doesn't enjoy the series these games are based on, I picked up 'Hollow Fragment' on a whim on PS4 and really loved it. It was a really charming game with some incredibly complex mechanics, and I sunk hours into it. 'Lost Song', by comparison, turned away from the MMO structure of its predecessor, and I feel it resulted in a far less interesting game, so this new entry going back to what I loved about 'HF' is a big plus for me. The game will also have a story supervised by franchise creator Reki Kawahara, so that's neat for fans of the series.

You can catch the debut trailer right here: