Coming to North America and Europe.

The latest game in Idea Factory's 'Hyperdimension Neptunia' series is a crossover with SEGA. Come October 18th in North America (October 21st in Europe), 'Superdimension Neptune VS Sega Hard Girls' will release exclusively on PlayStation Vita. The role-playing game contains characters from 'Sega Hard Girls,' an anime that reimagines SEGA consoles (such as the Dreamcast and Sega Mark III) as teenage girls.

The crossover is actually quite fitting as many 'Neptunia' characters are based off video game consoles (with series star Neptune being named after the cancelled SEGA system of the same name). The crossover is started when adventurer IF accidentally rewrites history, turning Neptune into a motorcycle and bringing the 'Sega Hard Girls' characters into Neptunia's world. Naturally, now the two groups must work together in order to save the world.

Check out the game's first promotional trailer below:

'Superdimension Neptune VS Sega Hard Girls' comes out exclusively for PlayStation Vita on October 18th in North America and October 21st in Europe.

You can find the latest info on 'Superdimension Neptune VS Sega Hard Girls' linked from our Video Game Release Schedule. 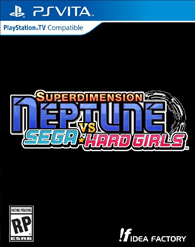